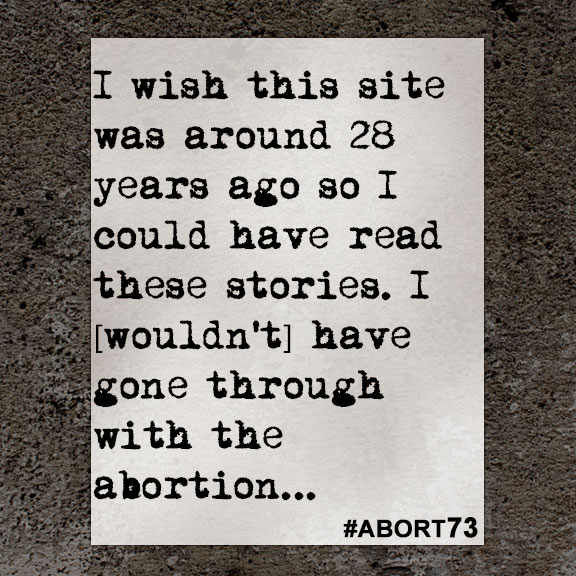 I wish this site was around 28 years ago so I could have read these stories. I [wouldn't] have gone through with the abortion...

I am the lowest of the low. I have been reading stories of young girls who have had abortions, but I was 26 and married. I had enough money to support a child, but I had already had two boys and one girl. I went to ask if there was any way I could find out if I was having a girl, but the doctor couldn’t tell me until I was too advanced and would have had to give birth to the baby after I aborted it. I know if I got to that stage I could not have aborted my baby just because I did not want to have a boy again, even though now I know I would have loved him as well.

I wanted my husband to shout at me and tell me not to have an abortion—to tell me that he would never speak to me again and divorce me, but he did not. I was not working and did not have the money for an abortion or know a doctor, but my husband took me to the doctor and payed for the abortion. I wish he had not. I have read that the statistics say that most women do not regret their abortions, even though they can be devastated at first. Supposedly, they soon get over it and go on to have happy lives and forget it after a while. But no matter how many years pass, let me tell you this, the pain gets so much worse with each year that passes. My abortion was 28 years ago, and I do not even know whether to grieve for a lost girl or a lost boy. I was only 6-weeks pregnant when I had the abortion. I have imaginary conversations with my grown-up son and daughter every single day.

I do not want any comments that god has forgiven me because let me tell you, I do not want to be forgiven as I can never forgive myself for killing a life that was growing inside me. I am so annoyed I did not get counseling first. I live in Cyprus, and and they do not give you counseling over here. I wanted someone to realize I did not really want the abortion. In one split second, I ruined my life forever. Why did I not just get out of the operating bed and run? I remember feeling great that I had a baby inside me, so why did I do it? I was feeling so ill, and I don’t think I was in my right mind. Now that all these years have passed, I realize every thing passes and I could have got through every thing, even giving birth which terrified me. I read a story on this site of a young girl who was crying while her abortion was being carried out, but they still went ahead with the abortion. I cannot remember which country she was in, but it just goes to show even with counseling, people are still having abortions that are tearing them apart. I wish this site was around 28 years ago so I could have read these stories. I know I could not have gone through with the abortion. I hate my doctor for not realizing my heart was not in it.