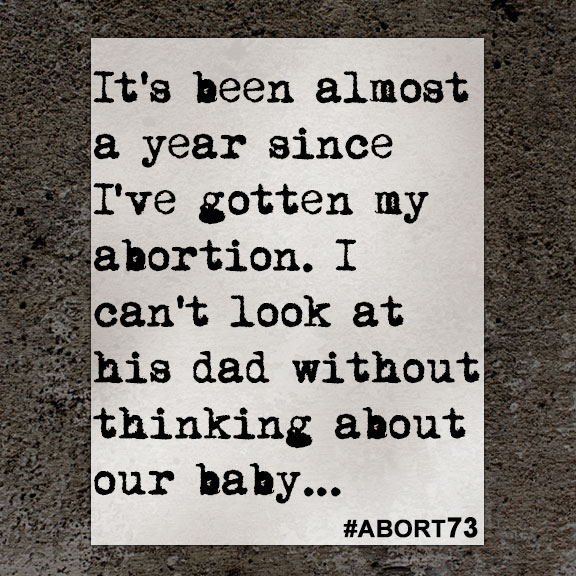 It's been almost a year since I've gotten my abortion. I can't look at his dad without thinking about our baby...

It was the end of the first semester of senior year; I was seeing a guy I had known for years and always had a crush on—but we strictly just had sex with each other. I was on birth control, so we thought everything would be okay. I took a pregnancy test just to make sure I wasn't pregnant. All of the other ones had come up negative, but I was feeling really strange. Thinking it was going to be negative, I looked down, and it was positive. I couldn't breath when this happened. I automatically called my partner. Minutes later he had money for an abortion and was going to call to get an appointment because he didn't want a kid.

I made an appointment, but a week later I ended up backing out. He stopped talking to me, and whenever we would talk he would tell me how selfish I was and how I was ruining his life and all I wanted was his money. A few weeks passed, and I had to build up the courage to tell my mom,. She was pissed more because she was in the same situation, being a teen mom with me. She also brought up abortion, but again I said I couldn't do it and that I wanted this baby no matter what. I had three jobs on my own even though I was in high school and was juggling all of it. I was convicted I could do it.

I went for my first ultrasound, and I was 10 weeks along. I saw my little baby on the screen for the first time, and my heart melted. I fell in love. I sent pictures to the baby's dad and there was no response. A few weeks went by, and my mom sat me down to talk about this. All she asked me was why I wanted to have the baby, where I’m going to put it, and so on. I didn't have an answer for why I wanted the baby. I couldn't stop crying. That's when my mom finally talked me into getting an abortion. We went to Planned Parenthood a few days later. I got the ultrasound, and they said I was too far along to get an abortion in the state of Indiana. I couldn't stop crying. I just wanted this all to be over because I was so stressed with what my mom was telling me, and not having the baby’s dad there helping me.

My mom then found that Chicago has 2nd trimester abortions at their Planned Parenthood and had me make an appointment there. I scheduled it and took my best friend with me to go get this done. The night before I had the most vivid dream of me with my baby that I was having second thoughts when I woke up, but I still went to the clinic. The whole time I was there I wanted to leave. I knew what I was doing and how sad it was going to be. I went in for the ultrasound and blood work. I was 15 weeks along with a baby boy that I named Brentley. I got my last print out of him and went back to the waiting room. The whole time I had butterflies, which I then realized was him moving around. I wanted to run out so bad, but I couldn’t. I had come all the way to Chicago from Indiana. My mom would kill me if I left.

I then got called in to get medicine that had to be held in my cheeks that would dilate my uterus. I had to sit there with it in my mouth for an hour, and they finally called me back for the abortion. I looked at my friend with tears in my eyes and walked into the room. I had to be put to sleep because it was a late term abortion, so I honestly don't know what even happened. When I woke up I was bawling after realizing what had really happened. I felt so empty; I didn't have a bump anymore. I couldn't feel my Brentley moving. My heart hurt so bad, but I had to act brave before I could walk out of that room. I didn't want anyone to know how badly I was hurting, because they were all about to go and get this done too, and I knew it was just as hard for them as it was for me.

None of my friends except two know I got an abortion. Everyone thinks I miscarried, and it's so hard to lie about it. I hate when people ask what happened, because I have to tell my fake story because I absolutely hate what I did to my little boy. Not a day goes by where I don't think about him. It's been almost a year since I've gotten my abortion. I can't look at his dad without thinking about our baby and how our lives would be if I would've had him. I love my baby with all my heart and wish I could go back and change what I did.