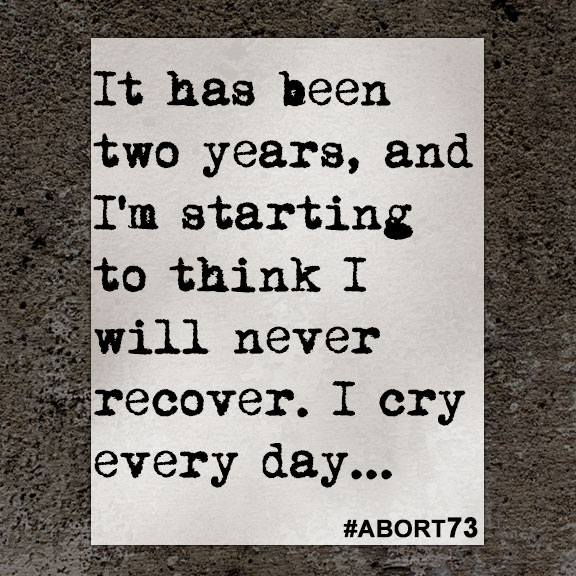 It has been two years, and I’m starting to think I will never recover. I cry every day...

I have been crying for hours now. I just can't take it anymore. So here's my sad story. I was 18 at the time, and my boyfriend was 19. We were both still living with our parents. I found out that I was pregnant and told only my boyfriend. We were crying, hugging and smiling all at once. We’d been together since we were 15 and were madly in love, but we still came to the tough decision to have an abortion. We weren't sure of what to do, because we were too young and didn't even finish our school. But the minute we started considering abortion, we both felt so guilty.

Meanwhile my mother was going through my stuff and found my pregnancy test. She immediately told my father. They both were mad and disappointed at me; they screamed at me and told me that I have to get an abortion. I didn't even hear one word of support from my own mother. So my mother scheduled an abortion. The entire time I was crying, nervous and confused, and my boyfriend also. Every night I would lay in bed, with my hand on my stomach, feeling my baby. I somehow knew I couldn't kill him, but I had no idea how I was going to survive with a kid.

So the day came; I woke up and sat in my dad’s car. I was so traumatized from all the screaming and pressure that I don’t even remember that morning. I left for the hospital and I didn’t even tell my boyfriend. He called me on my phone, and I told him where I was. He said that he needs to be there. After that, something in my head clicked and I just couldn’t go through with it. I imagined three of us playing, as a happy family. But I was there, crying in the bathroom, so alone, so sad and stupid. I tried to reach my boyfriend, but I couldn’t because his phone ran out of battery. So I went to get an ultrasound. I was lying there for five minutes when my doctor told me that I was six weeks pregnant, but he couldn’t find a heartbeat, or a baby at all in that little round sack. He then called in his colleagues, and a female doctor found my baby, but it was 4 times smaller than it should have been at the time, and then I heard it. A tiny quiet irregular beat that was there for a beat or two, and then gone. Then one beat. and gone for a minute.

The ultrasound lasted for 20 minutes, and I just looked at the screen, wishing that my boyfriend could be there to hold my hand. Finally the doctors told me that the baby appears to be not growing normally, and that I should do an abortion. My first thought was: what if it hurts me? I’ve had ovarian and abdominal medical problems since I was a kid. I can’t believe now that I was so selfish to not think of my baby.

I just cant stop crying as I’m writing this. So I did it. I went into the scary room, looked at the scary doctors, and I let them take my baby. And now I read in forums that some women hear regular heartbeats way later, and their baby starts to develop normally at 8-9 weeks. I didn't even ask if I could come for another appointment, to see if it’s growing. I just let him or her down. I was the only thing in the world to that little baby, and I never thought of him first. I was worried about myself. My boyfriend was devastated and not ready for the fact that I did it on my own, with him not giving his say into it. I was broken for months, crying and hating my parents for forcing me into all that. Now that I think of it, it was probably my own fault that my baby was not developing right, with all the crying and getting nervous and shaking of fear. I was such a kid then. Now, I would do everything differently.

Today I live with that same boyfriend—I couldn’t stand being near my parents. He is mentally crushed from it even more than myself. He just can’t believe that in the end, I didn’t tell the doctors to go screw themselves and wait to see if my baby would grow through a few weeks. He cant forgive himself, and neither can I. He sometimes gets really mad at the entire situation, and he takes it all out on me. He calls me names, even hit me a few times. He had a really horrible childhood, and is probably clinically depressed. I want to help him get over it, but I can’t. I just can’t take all this any more. It has been two years, and I’m starting to think I will never recover. I cry every day. The man I love more than anything hates me, and I killed my baby when all he needed was a chance. I sometimes spend hours imagining how our life would be so pretty, just the three of us. I don’t know what to do. I’m completely alone.