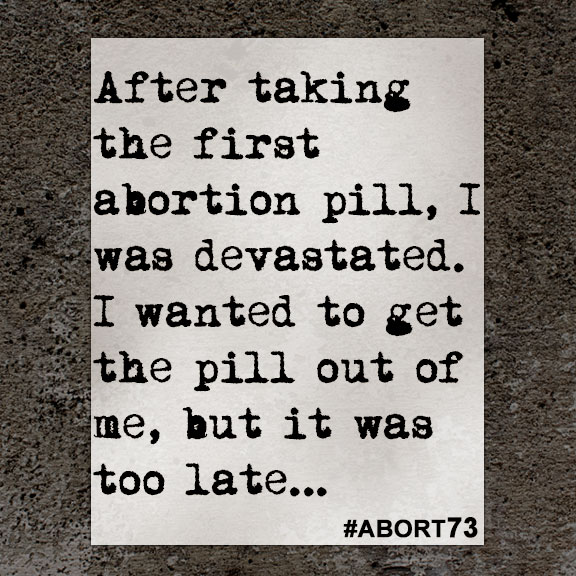 After taking the first abortion pill, I was devastated. I wanted to get the pill out of me, but it was too late...

I found out I was pregnant at 18 years old, just a month before I turned 19. I cried and thought straight away to get an abortion. I was in my first year of university, not really enjoying it, and had no idea what I wanted from life. I was shocked and scared. My boyfriend and I had recently split up. When I told him, he was adamant that I keep it. We started talking again, and every time he spoke about the baby it gave me goosebumps and made my stomach tingle. It's like he's never wanted anything so much in his life. I began to want the baby as well. I ignored all the negative things that came with keeping the baby such as, me having no job and being only 19. I wanted the baby, and we started talking about names and planning things. If I spoke to someone else who didn't think I should have the baby, that would change my mind again and make me doubt the decision to keep the baby. It was all very confusing, and I had no idea what to do. My parents were very supportive and if anything, I think my mother wanted me to have the baby. At 9 weeks, I went to the first abortion appointment just to talk about it. We had a scan which made me feel like it was real, and made me want the baby again. My mind changed a lot during the next few weeks until at 11 weeks I decided that a termination had to be the best thing. After taking the first abortion pill, I was devastated. I wanted to get the pill out of me, but it was too late. My mind was very unsure. I wasn't sure if it was me making this decision or just the influence of the people around me. I know realize I was influenced by the people around me, and I regret it a lot. Even though I'm young and not prepared for a baby, I know I could have coped well and I would have loved having a baby. I think that having a termination when your mind isn't 100% on the decision is a bad idea. I'lll never forget what I did…