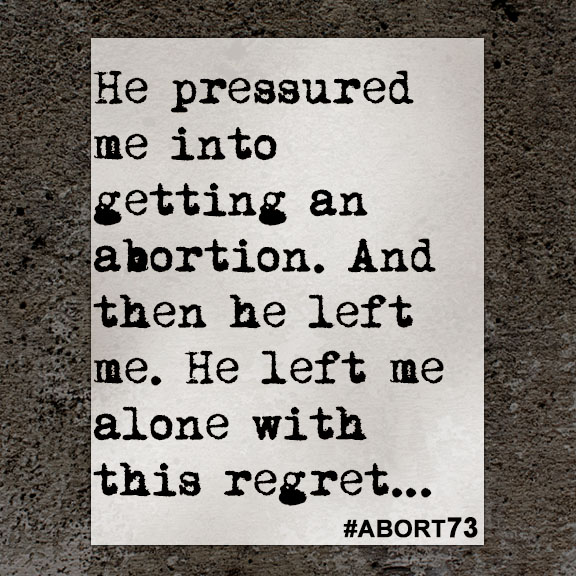 He pressured me into getting an abortion. And then he left me. He left me alone with this regret...

I'm only 16 years old and in the 11th grade. I have saved myself for the right person; I didn't want anyone to have something of me if they didn't deserve it. I wanted it to be someone I was in love with, without a doubt. I’ve loved a lot of people before, but not once like I loved my boyfriend. We’ll have been dating for five months on December 17, 2015. I love him more than anything, but I found out I was pregnant 10 weeks ago. I didn't let my boyfriend know until three weeks in. He was so mad because my cousin had told him. He was not happy. His first reaction was that he couldn't be a dad right now. He is really big in football, and he doesn't want to be a dad because that will ruin everything for him. He had me brainwashed. He told me I would ruin his life, that the only reason I can't kill the baby is because I want to trap him him. He was being so selfish. BUT HE TOLD ME I WAS BEING SELFISH! He said I was being selfish for saying I wanted to keep it. He isn't thinking about me or my feelings, but he swears he loves me. But he calls me selfish for saying I cannot kill it. He is so mean to me, but I stay with him. Why? I don't know. He pressured me into getting an abortion. And then he left me. He left me alone with this regret. If you’re thinking you have to do it for your boyfriend because you’re in love, YOU ARE WRONG!!! YOU CAN DO IT ALONE!!!!! It may not be ideal, but your baby will be here forever. Your boyfriend may not be here three years from now, three months from now, or even three weeks from now. Don't make someone else happy who might not be there for you in the long run. I am miserable now. And he doesn't even care.