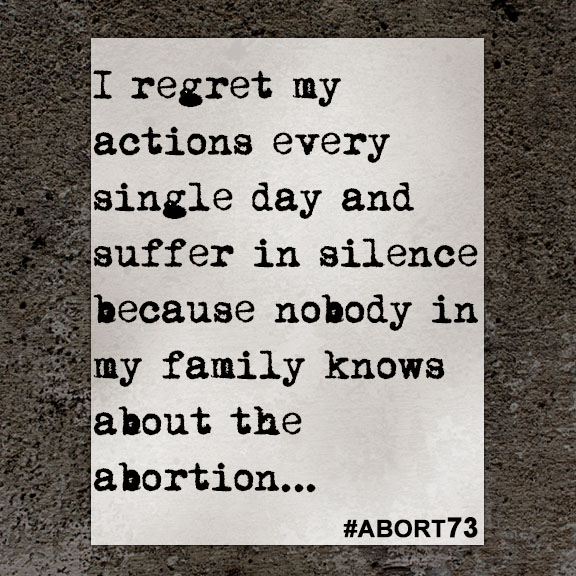 I regret my actions every single day and suffer in silence because nobody in my family knows about the abortion...

I was and still am in a loving relationship with a man four years older than I am. I fell pregnant  three months into our relationship. At first I didn't believe it—until my belly started forming a rounder shape. I didn't tell the father I was pregnant because he's such a good person that he would have encouraged me to keep our baby. We are both young and still staying with our parents. I decided to have a medical abortion. I had to repeat the procedure three times because I was so far along in my pregnancy. The first time, I took the pills. I experienced the worst pain I've ever felt in my life. I thought it was done, that my baby was gone through a heavy period, but I was wrong. A few weeks later, I threw up my breakfast and when I took a second pregnancy test it was positive. Foolish me, I didn't stop to think that it was a sign from God, that my baby was giving me a second chance. I simply sought more pills. The second time I took them, I felt mild pains but no bleeding or anything, so I took the pills a third time. The third time, they worked. Water splurged out of me during the night, and then the next afternoon, after experiencing pain every few minutes, I went to sit on the toilet and this sac came out of me and fell into the toilet, accompanied by a string which was attached to me. I pulled the string and when I stood up and looked into the toilet, I saw the smallest hand inside that sac, and that's when the realisation hit me. I had just taken a life away. I kept the entire experience to myself. Only after a few days did I tell my boyfriend that we were pregnant and that I had killed our baby. He was very supportive, but I can't help but feel like I betrayed him. I regret my actions every single day and suffer in silence because nobody in my family knows about the abortion. To them, nothing even happened. I am so ashamed of myself. I took away my baby's life because I didn't want to be judged by the people at school and the people at home, because I would be 16 and pregnant. I can never forgive myself or forget what I did.