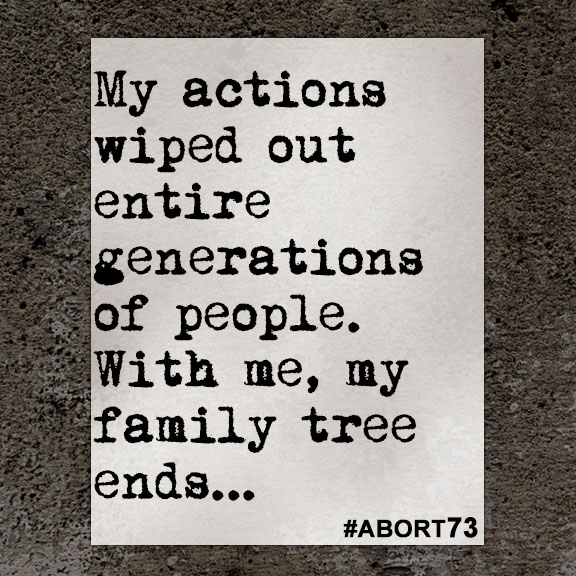 My actions wiped out entire generations of people. With me, my family tree ends...

I am currently a pro-life person—not because of religious views or a clearly-defined sense of right and wrong, but because I have lived with the results of abortion for over thirty years now. There is no greater teacher than living with the results of your own actions.

When I was in my twenties, I had three abortions. Yes, three. Why? Because I was selfish, afraid, and I bought into the lie that abortion was simply a procedure that I was entitled to. Never once, prior to any of these abortions that I had at Planned Parenthood, did anyone talk to me about alternatives. Never once did anyone talk with me about what multiple abortions could do to my body—causing infertility or damage. Never once did even one person ask me if I was sure this was the best choice for me.

After my third abortion, I stood in my bathroom and watched a thick blob of bloody “something” about an inch in size run down my right leg. I knew what it was, but the horror of it prevented me from allowing myself to admit that what I was seeing was what was left of my growing child.

When I was in my thirties and married, I was unable to conceive the children I then desperately wanted. Three abortions destroyed that option for me. Some would now say that I deserved to have that option taken away from me for murdering three children earlier in life. I agree. I lost that gift, and deservedly so.

Now, I am 53. I have no family left. No children or grandchildren. There are no wonderful photos adorning my walls of my children growing up, turning into whatever wonderful people they would have been. My actions wiped out entire generations of people. With me, my family tree ends. Generations of my family going back to Ireland, Germany, and Norway are just ended. All of the heirlooms and stories and photos I now own will simply die with me. Most will be thrown away or maybe end up in a thrift shop or antique store. Nobody will know the family history associated with my possessions, nor will they care. I weep when I look around me at the gift of generations handed to me that I selfishly decided would end with me.

Today, people try to differentiate between late-term abortions and early abortions. Really? Is there a difference? All of mine were performed early in the pregnancy. Does that mean I somehow am less guilty of destroying life than someone who waits longer? Perhaps the problem is that the aborted fetus actually looks like what it is when more time goes by. Perhaps the sin is greater when the visual evidence is unmistakable. Trust me on this one, It really doesn’t matter when the abortion is performed; the abortion ends the life, even when it doesn’t “look” like the baby destined for the world.

Some call me a murderer. I call myself that. I didn’t know then. I know now. My life was forever reduced and immeasurably changed by my actions when I was 21, 23, and 25. If you are thinking about an abortion, please stop. Stop for just a day. Don’t be afraid or selfish for just one day. Seek out all of the information you can, talk to someone who isn’t an abortion supporter. Try to see beyond today and picture yourself as an older woman, wishing with all of her heart that there were pictures of children growing up on the walls and a lifetime of memories of a family that never existed.

Only I harbor this secret; I have kept this within me for thirty years. Even my ex-husband did not know the real reason I could not conceive. Neither did my parents or friends. You see, this is the kind of guilt that just can’t really be shared with people who know you. It’s too awful. It’s too revealing. Please learn from me. Just maybe sharing my story will reach a young woman who can avoid my fate.

Abortion is absolutely about a woman’s right to choose. It’s just that the choice has consequences, and the immediate freedom an abortion provides comes with a price tag that must be paid later, one way or another. Don’t fall for that deceptive slogan. Please stop for just one day, and look a little deeper.