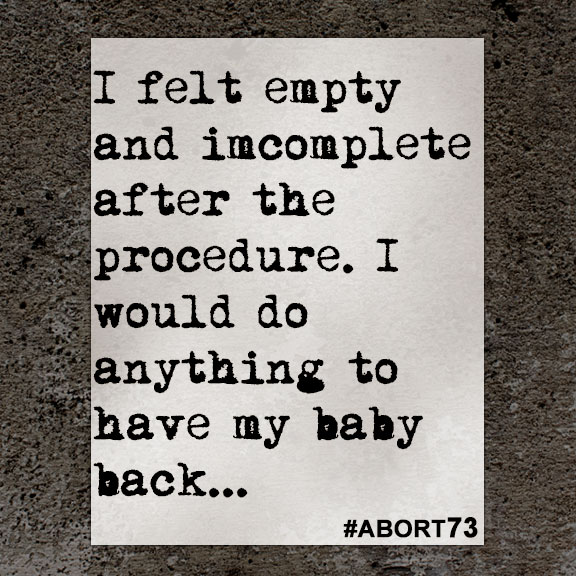 I felt empty and imcomplete after the procedure. I would do anything to have my baby back...

I went in for a medical abortion by but was exactly 9 weeks—so they told me a surgical procedure would ensure that the abortion took place, since the pill is less effective the longer you wait. I was so angry. I hated the idea of laying on a cold table staring at the ceiling while they strapped me down and put me to sleep. I just wanted to go straight home and not have to be traumatized any further. I never wanted to abort, but I was young and financially incapable of handling the responsibility of a child. I was led to the surgical room and everything happened exactly as I imagined it. I went limp and tried to zone out as much as I could, hoping I would be dead before it was over. I wanted to die with my baby and apologized silently for my selfishness. I woke up in a big recliner, next to another girl who was tearing up. As soon as my eyes opened, the reality of it all hit me like a brick, and I couldn't control my emotions. I cried and balled, missing the roundness and fullness I felt in my belly. I felt empty and imcomplete after the procedure. I would do anything to have my baby back. From that day, I promised myself to never consider abortion again.