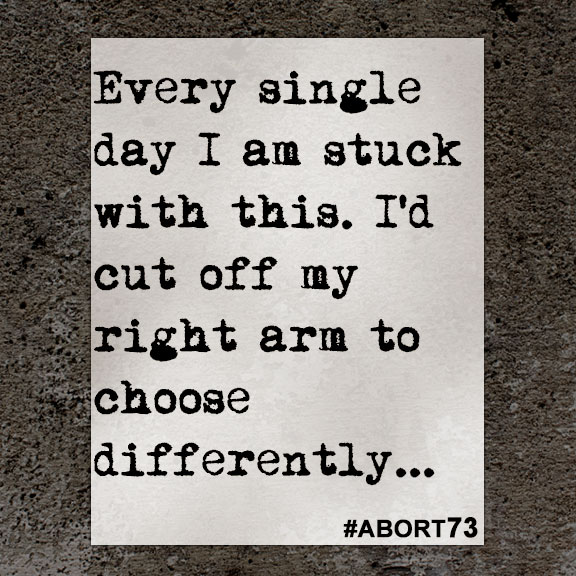 Every single day I am stuck with this. I'd cut off my right arm to choose differently...

I was a young twenty-something, already a single mother. The first time I got pregnant was as a teen, and I felt a powerful drive to protect my baby. And it cost me a lot. Even my home. But it was worth it. But I began having problems with my birth control method, and wasn't prepared for sex, but my lover at the time pressured me into having sex anyway. I had that same gut feeling that I was pregnant. I don't know why, but I felt very scared this time, afraid to let everyone down again, and the father took abortion as a given. So I rationalized with myself that if I just needed to do it as soon as possible. I did not let any weeks go by. I was in a state of panic and convinced that if I just did it as soon as possible, surely it wasn't a baby yet, not human. I turned my feelings off. I had it done. I was asleep. My feelings remained off for about 23 years. I became pro-life but refused to acknowledge my own abortion. I was still on Off. I refused to acknowledge the abortion. I married a great man and didn't tell him. I became a Christian and confessed all my sins except that one. It was buried to such a depth that I'm still not sure how it came out. And then, one day, I lost it, and I mean LOST it. I couldn't drive straight. I had to park. I couldn't see straight. I was shaking. I couldn't move or breath. Complete panic attack. All I kept thinking was, "If I had given my child up for adoption, I could be reunited with a grown child, possibly having the joy of having that child hand me flowers and tell me about their life. Instead, I'm a mess and he or she is dead." I struggled for months. I had to have an honest conversation with God. I shook with embarrassment as I told my husband. And now I am stuck, every single day I am stuck with this. I'd cut off my right arm to choose differently. I know I'm forgiven but I guess it won't be until I get to heaven that it will feel like it.