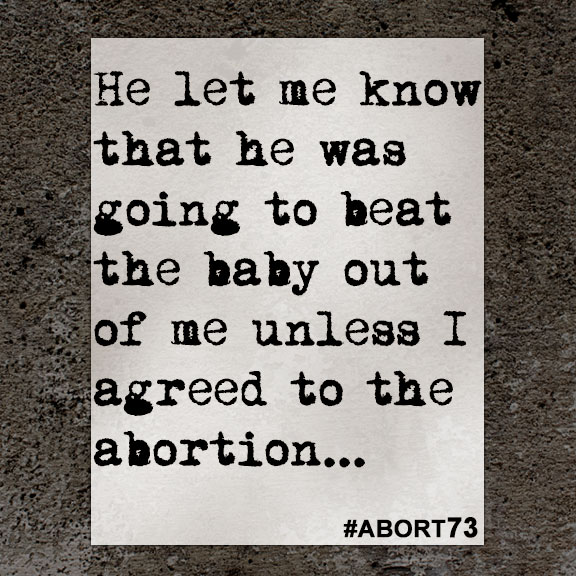 He let me know that he was going to beat the baby out of me unless I agreed to the abortion...

I have only recently started to tell my story, and it aches. Sixteen years ago, my crush of five years finally noticed me and asked me out! I was SO excited. To have him notice me made me feel attractive, wanted, and loved. We had been dating for about three months, and he asked if I wanted to take a trip with him. Worst. Decision. Ever.

Wow, this is hard to say. He tricked me into prostitution. I believed I loved him at first, believed it when he told me that everything was OK—that we were going to be rich. It did not take very long for my conscience to catch up to me, and I started to look for another job—somewhere, anywhere, outside of the sex trade. Well, my "boyfriend" didn't like that very much, and he started to put me down, make me feel worthless, and unworthy of any love. Soon after that, the hitting began. It was horrible, to feel like you had nowhere to go, because you gave up everything and everyone for this person who was supposed to love you. A year into our "relationship,” I found out I was pregnant! I was so excited, scared of becoming a mom at such a young age, but I was gonna be a mommy. This baby was going to LOVE me! Little did I know he had other plans.

One night, I wasn't feeling too well and stayed home. He took this opportunity to have a "serious discussion" with me. These usually involved fists.

He had decided that I needed to get an abortion, that there was simply no other choice. I was mortified! This was my baby, how could he make me get rid of it? As I expected, when I said “no” the pushing, hitting and eventually kicking began. He let me know that he was going to beat the baby out of me unless I agreed to the abortion. I was so weak.

I wish I had the strength to leave.

I took my baby’s life from her in the year 2000. I would have a beautiful child of God that I had helped create, if only I would have had someone to talk to, someone who would listen, someone to tell me that 15 years later, I would still be crying for my sweet baby.