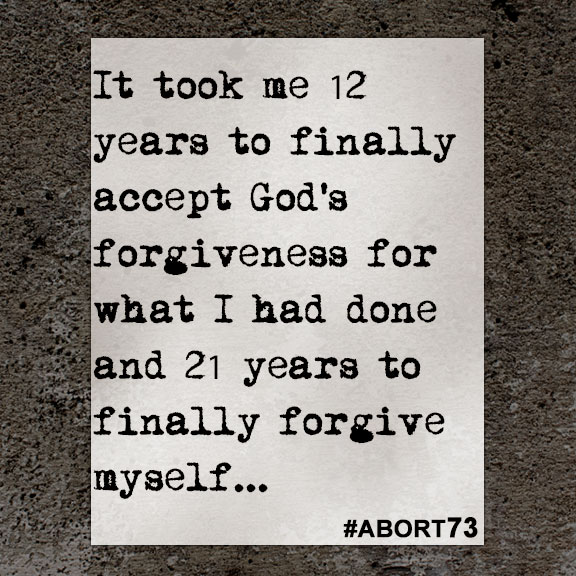 My story is twofold.  At 14, I gave myself to a boy who was 13 because he convinced me that it was the only way to prove my love to him. I was foolish to believe this because true love would have waited. At 15, I was pregnant with my first child. Both he and his parents tried to get me to abort the child. I would not listen. They tried everything, but I just could not do it. I somehow knew she was more than a choice. She was a child, my child. He threatened to leave me if I had her. I chose her. She was born after I had just turned 16. She was beautiful in every way. I was blessed to have a mother willing to help me take care of her.

My boyfriend remained with me in spite of having her. His threat of leaving subsided. But abuse from him had begun during the pregnancy with neglect and more verbal threats/insults. After her birth, physical abuse from him ensued. One night he beat and raped me. I begged him not to get me pregnant because I knew it was the time of the month that I could. When he was done with me he said, "Take that; that one was a boy!" And it was.

Now I was 17 and pregnant with my second child. My grandparents still weren't speaking to me as I was the "shame" of the family. My father had a hard time looking at me, and I knew it. The guilt was immeasurable. I felt that I could not come home pregnant again. The fear of doing so was greater than the fear of an abortion.

We had to wait to scrape up the money to get it done. By that time, I was too far along for the suction abortion. I had to get a fake ID and go to the next state where a later-term abortion could be done. My so-called boyfriend and one of his buddies took me there. We stayed in a dive motel where they left me alone while they went out to find a good high. I remember hiding in the corner, terrified as I heard bottles breaking and fighting outside my room.

The next morning they took me to the hospital where the abortions were performed. I was in a room filled with young women like me. We all had our own bed. There must have been at least 10 of us in there. Some were crying out in pain as they were having a saline abortion. The nurse came back and told me I was too far along and would have to do the same. I told her that if I had to go through the labor anyway then I was going to leave and just have the baby. She asked me to wait a minute and came back shortly telling me they would put me to sleep and do a D&C.

I told myself that this would be a perfect solution for me. After all, if I was sleeping then I could pretend it never happened. I gave the go ahead. Fear of facing my parents and grandparents pregnant again prevailed. I awoke from the surgery, and they gave me coffee and some cookies to eat. I immediately began throwing them up because of a reaction to the anesthesia. I was left alone to try to catch it in a small peanut bowl, but this was far from sufficient. I had to get to a bathroom. I looked up and saw one across the room. I got up from my bed and ran to it. As I did, I heard laughter. I turned to see who was laughing. It was my supposed boyfriend and his buddy. My backside was exposed, no protection had been placed on me, and I had left a trail of blood across the floor. I closed myself off in the bathroom and crumpled to the floor and wept. I said to myself, “It never happened, it never happened!”

But it did, and a part of me died with that child that day. I somehow knew it was a son. I began using drugs heavily to numb the pain. I became suicidal. I did not care anymore. But then there was this child at home who needed me. I had to stay alive for her. I couldn't allow him to get her. I could not trust him to love her like I would.

It took me 12 years to finally accept God's forgiveness for what I had done and 21 years to finally forgive myself. I realize now that sharing my story, instead of hiding my shame, could possibly save a life. And if it is only one life, then it was worth sharing. One thing I can say for sure is that I never stopped regretting what I did to my son, and I never once regretted what I gave to my daughter—LIFE!

Today, that same daughter has given me my first and only grandchild. I look into her eyes and realize she might have never been, but she is, and I am blessed and honored to know her!!!