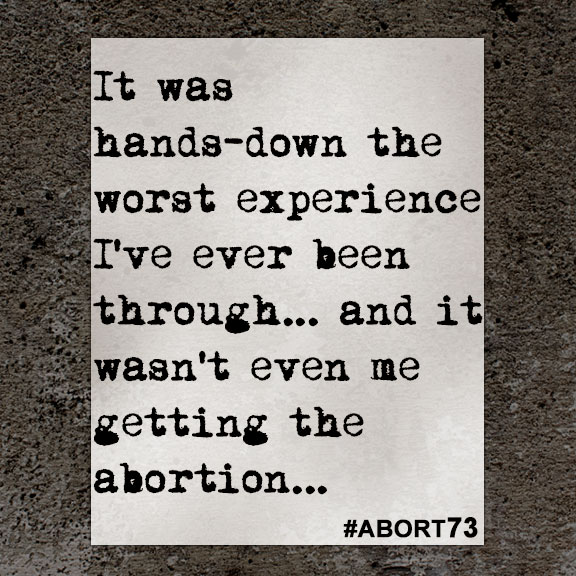 It was hands-down the worst experience I've ever been through... and it wasn't even me getting the abortion...

When I was 16, I was told about abortion. I became sexually active around 17. I thought about what would I do if and when I got pregnant. I was always for abortion until I was 22 and looking for a job. I was desperate. I finally got an interview with an office that handled pregnancies and deliveries. One of the doctors that was hiring performed abortions; the other doctor did not. I was to work for this doctor in a week or so. I was asked to stay after the interview because I was hired that day. The doctor that I was supposed to work for wasn't in the state yet, so the other doctor asked if I would work with him that day, just to get the feel of the office. Desperate for a job, I said, “OK!” This doctor was the doctor that performed abortions. I told him my opinions on it—that I agreed with it. The 30-year-old woman walked in. She had cheated on her husband and become pregnant. I thought as she walked in, “OK, I'm going to experience this with her, since I am assisting the doctor.” We laid her down on the table and gave her the medication to help her relax and not feel pain. The woman still cried the whole time but insisted she wanted to go through with it. We did an ultrasound before we did the procedure and looked at her baby with a healthy heartbeat. It was the cutest thing I've ever seen. We then started the procedure, and I had no idea how much blood was involved—so much blood, and so much crying. After the procedure was done, we did another ultrasound to confirm the baby was gone. As I looked at that screen that had a baby on it only 30 minutes before, all I could see was a dark space. That baby with a healthy heartbeat had been sent through a tube and put into a jar. It was hands-down the worst experience I've ever been through, and it wasn't even me on the table. From that day on, I told my boyfriend (now husband) that if we got pregnant, I would never abort it. Please, before you consider abortion, you should sit through one, or really listen to the other options. It ruins your body and will put you your mind in a dark state. I still cannot get the images out of my head, and it wasn't even me getting the abortion. It turned me from pro-choice to pro-life.