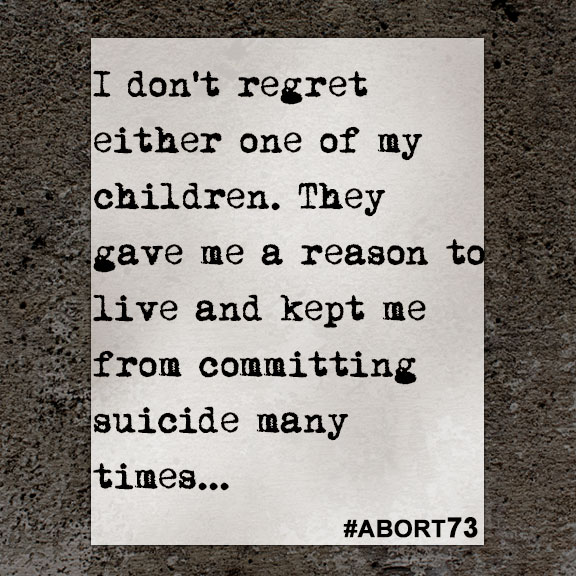 I don't regret either one of my children. They gave me a reason to live and kept me from committing suicide many times...

I've had two abortions; the first one after a guy held me down and forced himself upon me. My son was 2-years-old. I was not going to allow myself to be trapped by a sorry, no-good guy. I went for advice about what to do, and my grandmother said she felt abortion was the best thing for me to do under the circumstance. The second time, I was engaged to a guy that said he wanted children—until I got pregnant. I already had a 4-year-old son and was looking forward to another child until the father started staying out all night. I packed up my things and went back home to my mother, but she didn't want us there. I had always been an inconvenience in her life, so I sent my son to my grandmother's while I tried to figure out what to do.

My mother convinced me that an abortion was the only way and that my first concern should be about my son that I already had. So she took my diamond ring to my aunt and told her we needed the money for an abortion. My aunt bought the ring, and my mother drove me to the clinic. I was 22-years-old and 14 weeks along. I cried the whole time, and the doctor asked me why I waited so late—yet he continued on with the abortion. I went home afterwards and cried for days. There was a profound sadness, and I was so empty on the inside for many years. I begged God for forgiveness and promised that if He ever gave me another chance, no matter what, I would not have another abortion.

Several years later, I found myself pregnant again and not married. This time, the doctor told me my blood work indicated that I might have a child with down syndrome or spina bifida. They suggested that I have an abortion. I made a promise to God that I would never do that again. I was worried about my baby and the future I might face, but God blessed me with a healthy baby girl. That baby girl is 21-years-old now and has been nothing but a ray of sunshine in my life. My other child is 28-years-old now and even though I chose to have him, it was not for the right reason. I had him so that I could have love in my life, because I never received it from my parents.

I don't regret either one of my children. They gave me a reason to live and kept me from committing suicide many times. God knew what he was doing when he gave me my children. He always knows what He is doing, even if we don't understand it. Don't EVER let the helplessness of your situation or anyone talk you into an abortion or tell you it's okay because it's not. They are not the one that has to live with the decision you make; you are. Even if you learn to forgive yourself, you will NEVER forget that child. I am thankful God forgave me, but it took me 12 years to forgive myself. I will always regret it, and I still think about my babies. I still cry sometimes when I think about those precious lives. I have comfort in knowing that one day I'll see my babies in Heaven. Remember that even in the worst situations, a ray of sunshine can shine come through. You will never know unless you give it a chance. God saved me through the children He gave me. They showed me love and taught me how to love. I will always be grateful to God and my children for loving me.