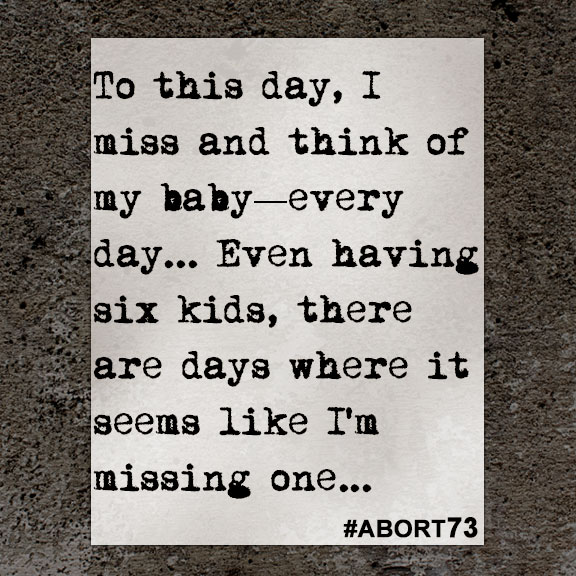 To this day, I miss and think of my baby—every day... Even having six kids, there are days where it seems like I'm missing one...

At the end of August 2012, I found out I was pregnant. I was already a single mom of three kids, but I was elated. When I told the man I was dating, he was not happy at all. He said a lot, but the one thing that's burned into my mind was, 'I don't have the money to take care of it.' I was flabbergasted. He then told me that if I didn't have an abortion, he would never be around for me or my kids.

I thought a lot about what I was going to do, with a lot of going back and forth. I finally made my decision and decided to go through with getting an abortion. I'll never forget the day: October 17, 2012. I went in, they did an ultrasound, and gave me a shot. The experience was cold and frightening. The procedure itself was painful. The nurse and the doctor were not friendly at all. Afterwards, I sat in a recliner for about ten minutes, sobbing.

I then went home and was completely out of it from the medication. I was numb to the pain, both physically and mentally. I turned to hard liquor to ease the pain and block the thoughts. A month and a half later, the man I was with left me. It shattered my world. Then the guilt set in even more.

In the midst of my depression and heartache, my then 5-year-old son asked if we could go to church—out of the blue. He hadn’t been there since he was a year old. I agreed, and we went the following weekend. My heart was full of conviction, and I cried through several services thereafter. My pastor said, 'God loves you no matter what you've done.' I said, ‘Yea right!’ and immediately asked for proof following the service. I'm happy to say that three years later, I'm saved, baptized, and actively serving in my church. It's a total relief that I'm forgiven, going to heaven, and will one day get to see my sweet baby.

I got married in November 2013. With my marriage came a great man and two step-children. Then God gave me his grace in physical form and gave me the most beautiful little girl who is 5-months-old. Her name? Grace! :)

To this day, I miss and think of my baby—every day. I wonder what he or she would have been like. Even having six kids, there are days where it seems like I'm missing one. The only comfort I have is knowing my baby is in the arms of God, fully protected and loved.

Jesus paid it all, ALL to Him I owe! I am so thankful for His forgiveness.