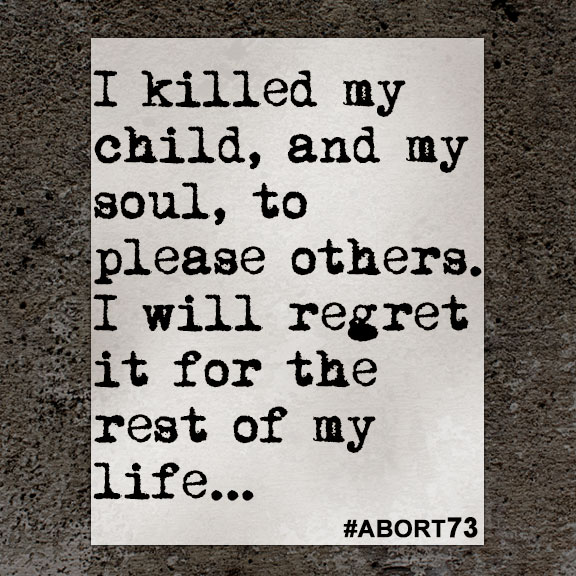 I killed my child, and my soul, to please others. I will regret it for the rest of my life...

I was 18 and had just moved to a new city. I was so scared; my boyfriend and I were having trouble. He cheated on me with a coworker. I could barely afford anything for myself. I just lost my job and had yet to find a new one. I was in a lot of pain and constantly sick from the pregnancy—that was how they finally got me to agree to the abortion. I couldn't look for work because I was to sick, so how could I take care of a baby? I went to the ER for bleeding and pain. They told me my baby's heart beat was weak and I needed to follow up with a ob-gyn immediately. I had no insurance, no job, and no money, so a friend told me to call this women's clinic. Their solution? Just abort the baby before I miscarry.

I called and scheduled my appointment, then I called and cancelled. The clinic made me feel like crap for canceling; they just wanted my money. My boyfriend became angry that I cancelled. My friends and what little family I had were also angry. They didn't want me to have the baby. They all said the baby was going to die anyway. Why not just get it over with? I called a week later and set the appointment. On the day of my appointment I had to literally talk myself into not running away, from every one. I should have ran out of there; so many times I wanted to run. But I had no one believing I could carry my baby, no one believing my baby could live, and adoption wasn't even a thought. Something was wrong; I'll never know what. The nurse messed up my IV five times, and I felt everything they did. I should have felt it; I deserved to be in pain because I was killing my baby. Right then I hated myself for not being stronger—for not protecting my child like a mother should have.

The recovery room made me feel even worse. Others were smiling, happy to have it over. I was rotting away. I felt gutted, but I also thought that now everyone would leave me the hell alone. I did what they wanted; I became a murderer. But they didn't leave me alone. In fact, they drilled me about how I made that choice and how I should have never have gotten pregnant in the first place. I killed my child, and my soul, to please others. I will regret it for the rest of my life. Even if I had miscarried my baby a day later then my appointment, at least I would have known I gave him/her a chance!!! Abortion, and the lack of education and support around young women, needs to stop; it has to stop!!!!