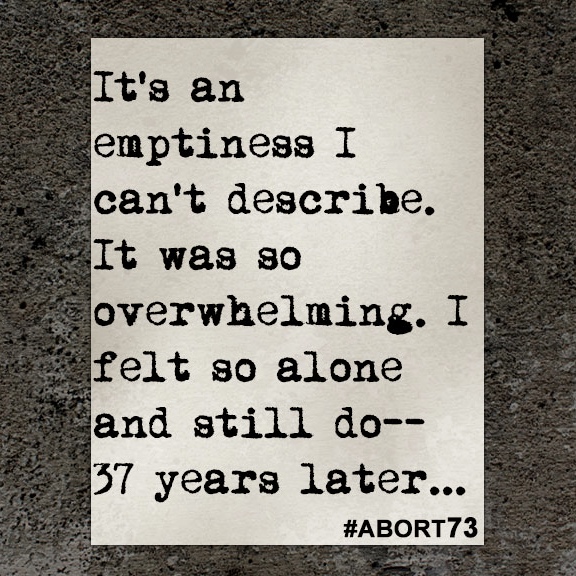 It’s an emptiness I can't describe. It was so overwhelming. I felt so alone and still do—37 years later...

I had an abortion when I was 18-years-old. I was against abortion. I advocated for life as the Supreme Court was ruling on abortion. I had X-rays that put the baby at risk, so my doctors said. I wanted me to keep the baby but was pressured into an abortion by everyone I talked to. It had just become legal for the first trimester. I was 14 weeks, but the doctor lied and did it anyway. I woke up so empty. It’s an emptiness I can't describe. It was so overwhelming. I felt so alone and still do—37 years later. I accepted God’s forgiveness early on. It was easier to accept His forgiveness, but I couldn't forgive myself. I was tormented by my decision. It took me 13 years after I read a book on inner-healing. I claimed my baby and when I did that, I was able to forgive myself. Months later, I found myself not married and pregnant again. I had two boys of my own and had just gone through a divorce I didn't want. I loved my boys so much because after my abortion I proceeded to have two miscarriages and difficulty getting pregnant. The father who got me pregnant was an abusive drug addict. After I told people around me I was pregnant, dozens told me to get an abortion. I also had people tell me to adopt him out, that my life we be a nightmare with his father. I remembered and still felt the emptiness from my former abortion. I chose life this time. His father threatened me with a knife saying he would give me his own abortion and cut the baby out of my tummy himself. He said he was not ready to have a baby and grow up. He was 35. I fought back, got away from him, and went into hiding. I had a boy and kept him. I never regretted that decision. Yes I had difficulties with his father for 20 years. I made a choice to have sex with this man which resulted in a pregnancy. I protected my child from his father while preserving his relationship with his father. He got to be my 3rd son, a younger brother to two older brothers, an older brother to my 4th son, and a husband to his wife. Some day, he will be a father to his children. He has two designing degrees and is an artist. His little life grew inside me at the most inopportune time. He saved my life, helped me rewrite history, and make the right choice in a similar situation. He works for a college and has his own business. I am so glad I had him and kept him. I'm so proud of him. I thank God for healing me.