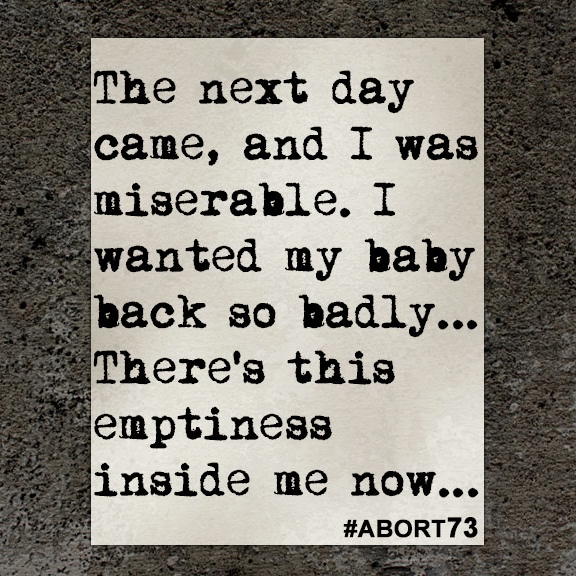 The next day came, and I was miserable. I wanted my baby back so badly... There's this emptiness inside me now...

I found out I was pregnant when I was almost two weeks late with my period. I didn't think I was pregnant right away, because who wants to think that when you're young and not ready? I waited day after day for my period and nothing. So I decided to take a pregnancy test. Negative. Relief rushed over me, but a few days later there was still nothing. My boyfriend of almost three years decided we should take another test. So we went and bought more. I took them and there is was—the dreaded positive sign. My stomach dropped; I didn't know what to think or how to feel. My first thought was to get rid of it. It was the easy choice, right? I told my boyfriend that it was positive. He chuckled and said, "Well, what should we do?" We looked up abortion clinics and the different methods. We didn't talk much; I didn't want to. I was sickened and nervous. We kept going back and forth about keeping it or not. We both have jobs, not careers. They are not well paying, but jobs none the less. We both have supportive families (who were not told of the pregnancy), and we have a mature, loving, steady relationship. But the fright over money and the struggle of having a kid made up our minds. We didn't want to struggle; we didn't want to fear not seeing the baby; we didn't want to not see each other. So I made an appointment at a local Planned Parenthood. It was three days away. We still had no clue what to do. I wish we had talked to more people, including our parents. But I was ashamed and scared about what they would think. So I didn't. The day neared, then the night before neared. We were still going back and forth. It was a battle. I was torn both ways. Did I want to go through with it, and that be it? Or not and have a beautiful baby in seven months? I slept on it one more night, woke up and still had no clue. I cried. I was so scared. We left late for the appointment. I said, “Let’s just go, and we will see how we both feel as we near.” That's what we did. We got closer and closer. I still had the same thoughts. Then we made it. My stomach dropped; my nails were gone. I was shaking. We pulled into the parking lot, I grabbed my 24-hour consent form and walked to the door. I heard from behind my boyfriend saying, “Let’s just go.” So we left. I was slightly relieved. Then he pulled into a parking lot, got out, and put his head down on the hood. He thought—thought about what? I don't know. Then he got back in, and we went back to the clinic. I filled out the paperwork and waited. I think at this point, I was just numb. I didn't have any feelings anymore. I felt like, whatever, I'm here I might as well do it. I didn't have the concerns anymore. I knew deep down that my boyfriend wanted this, so we were going to do it. I got called back. Once again, my stomach dropped, but I was still numb. I got my ultrasound, which confirmed that I was six weeks and four days along. That four days hit me like a brick. I then went to another room and then three more after that. With each one, my feelings returned more and more. But not enough to back out. This was it. I was now in the operation room. I was taking off my shoes and my pants. I laid down on the table, with the sterile white sheet draped over my bottom half. The room was bright and clean. I waited a few minutes, and then the doctor and two other women came in. The procedure began. I kept thinking that it is really happening. Almost as soon as it began, it was done. I was clothed and ready to make my walk to the recovery room. The relief I felt was nice. I was comfortable. Everyone there was so kind and helpful. I felt at home. However, I knew I wasn't. And I knew I just made a mistake. The rest of the day was a blur, since I was on a mild sedation. I mainly slept. Then the next day came, and I was miserable. I wanted my baby back so badly. I wanted that grain of rice back inside my belly. I wanted it to grow into something bigger, something healthy. But I knew it wouldn’t, and it killed me. There's this emptiness inside me now. I need to fill it. I want a baby back in me. I regret it so much. I don't want my boobs to stop feeling sore, because I don't want to lose that connection quite yet. I'm not ready. I hope one day my decision gets easier—that one day I see that it was for the best. This was one of the hardest decisions of my life. I strongly advise anyone who reads this—who is thinking about abortion—to talk to your family. Talk to as many people as you can. Because it's too hard a choice to leave between just you and your partner. There's so much to think about. I wish we had a month longer to think it over, but really I wish we had just kept it. I pray that it gets easier for anyone who is going through a similar story—that you won't live with this regret forever. I pray that God forgives you, if you have forgiven yourself.