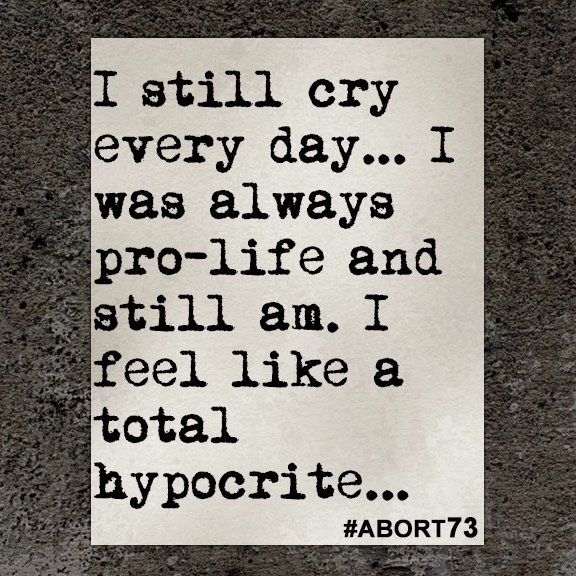 I still cry every day... I was always pro-life and still am. I feel like a total hypocrite...

It's been nine months since I had my abortion. I think about it every day. It kills me now to think that any day now I could have been a mother. I didn't want the abortion; I didn't even consider it an option. As soon as I took that pregnancy test I just kept thinking about how insane it was that I was going to be a mother. I was scared of course, but I wanted to take responsibility for my actions and raise my child. I know I would have loved him/her. Even if I was struggling, I know if I had my child, I wouldn't have regretted it. But because I got an abortion, I regret it and hate myself every day for it. I was 16 and my boyfriend was 19. When I told my mom, she got so mad. She said she would call the police on my boyfriend and get him arrested for statutory rape if he didn't convince me to get an abortion. At the time, I didn't know that because I was 16 and it was consensual, he couldn't get arrested. So I was convinced if I had this baby I would have to do it alone, without the father. I couldn't do that alone; I was so scared. My boyfriend and mother thought I should get an abortion, so I went through with it. I couldn't raise a child without the father, without the support of my mother, and without money. I didn't have a job at the time and neither did my boyfriend. When I went to the clinic, I was hysterically crying just thinking about it. I was crying during the whole thing. I even asked to keep the pictures taken during the ultrasound. They told me I was six weeks pregnant. I was hysterically crying; I couldn't even look at the picture until I got home because I knew if I saw it I wouldn't take the pill. They asked me if it was my choice or if someone was making me. I said it was mine. I was crying for a week after the abortion non stop. Seeing kids makes me sad, and I hate myself for not giving my own child a chance to take their first breath. I still cry every day, knowing I gave up the chance to meet my own child. I was always pro-life and still am. I feel like a total hypocrite. It was my choice, and I will always regret it.