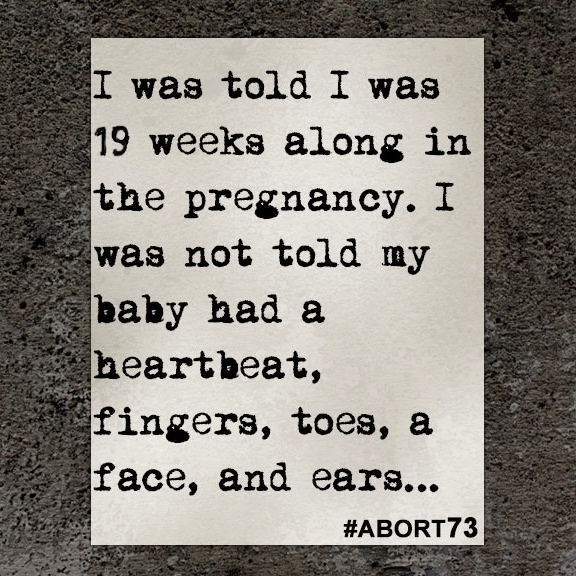 I was told I was 19 weeks along in the pregnancy. I was not told my baby had a heartbeat, fingers, toes, a face, and ears...

I was 18. I had a one-year-old son. I had just graduated from high school. I was a party girl. I was drinking often, smoking pot daily, and dropping acid almost every weekend. I found myself pregnant again. I was scared. I didn't know what to do. I had a very weak support system, and they were encouraging me to abort my baby.

My baby was dehumanized from the moment I made the call for an appointment at the "clinic." My preborn baby was only referred to as embryo, fetus, blob of tissue, clump of cells, or product of conception.

I was given an ultrasound. The monitor was behind a curtain and facing away from me. I was not asked if I wanted to see my baby. I was told I was too far in the pregnancy to use this "clinic's" services. I was referred to another "clinic" that performed surgical abortions.

I was avidly discouraged from talking to anyone outside of the "clinic" on my way in. I was told they were crazy people who would lie to me or try to make me feel bad about my coming "procedure." I was told they would try to give me literature that was full of lies and fake photos of abortions.

I was told I needed to come in a day before the procedure to have laminaria sticks inserted into my cervix to cause dilation so the "doctor" could more easily enter my uterus and retrieve the "products of conception." I was not told that my baby was so far developed that cervical dilation was necessary to remove a baby that probably weighed over a pound. I was not told that the use of laminaria can cause infection that can lead to infertility. I was not told that laminaria contains an extremely high amount of iodine that can affect your thyroid.

On the day of the "surgery," I was nervous and having second thoughts. I had no support. I travelled to the "clinic" alone on a bus and would be later picked up by my boyfriend. I told one of the nurses that I wasn't sure I wanted to go through with it. She told me it was too late—that if they removed the laminaria the "fetus" would still not be viable, and I would probably deliver it in a toilet. This was all a lie. The procedure can be stopped and the baby can be saved, even after the laminaria has been in the cervix and dilation has started. I was horrified and frightened by her words and knew I just had to go along with it.

I was placed in a tiny room with 11 other woman of various ages and races. Some were laughing and joking with each other. Others sat silent like myself. One just poured tears in the corner. I was numb. I felt somewhat like an animal, caged in this room, waiting for the abortionist to begin the assembly line of baby killings for the day. It felt dehumanizing and degrading.

I was brought into the room where the "procedure" would take place. There was a tray of tools, but they were covered with a paper sheet. It was cold. An IV was started and the nurse explained that I would fall asleep and when I woke I would no longer be pregnant. She told me I would have mild cramping for a few days, but everything would shortly go back to normal. She did not tell me that my baby would be dismembered, its skull would be crushed, and its tiny body would be mangled and then reassembled on a tray to make sure "they got it all." She did not tell me that my baby would be disposed of as medical waste and probably incinerated—maybe even sold for parts, as we now know.

I awoke. It was colder still. I was alone and shivering. I immediately felt regret. I felt empty. I tried to be relieved, but I couldn't wrap my mind around the events of the past two days. I was groggy and in and out of consciousness. A nurse came in and told me my ride was there. She said everything went as planned. She sat me in a wheelchair, handed me a bag full of maxi pads, condoms, and birth control pills, and wheeled me out the back door to my ride.

I lived with this secret—only a very few people knew about it—for about 14 years. It was only when I came to know God, my Creator and Savior and Forgiver and Loving Father, that these wounds would begin to heal. Knowing the Maker of the universe forgives me has allowed me to forgive myself. Knowing that I don't have to be hell bound because Jesus paid my debt has allowed me to live without the drugs and alcohol I used to numb myself with.

There have still been consequences and regrets. Those don't go away. No one told me that I would have to tell my children about their sibling that I selfishly murdered. No one told me that my son would look at me in disgust and stomp away, shouting "How could you do that?! Why would you do that?!" No one told me every April (the month my baby died) and every September (the month my baby was supposed to be born), sometimes in between, my heart would be heavy with "what ifs." No one told me I'd long to hold him (I've always thought of my baby as a boy, for some reason) even 17 years later. No one told me I'd think about how he'd be driving now or graduating from high school next spring. No one told me I'd wonder what he would look like, or if he would be short or tall, or what his laugh would sound like. I don't dwell on these things, but they do cross my mind and I think they always will. My hope is knowing I will meet him in Heaven, and what a glorious day it will be!

If you're considering abortion right now, please know that there is no hope in killing your baby. If you're in the midst of an unplanned or unwanted pregnancy and you're scared or unsure of what to do, there is help. There are resources and people who will come alongside you in any way they can to help you either be a mother to your child or lovingly place your baby with a family that will love him or her. Abortion is an eternal decision that leads to death, not only of your child but of your soul.

If you have had an abortion and feel wounded or hopeless, there is hope in Christ. Turn to him, confess, and repent of your sin. He binds up wounds and heals the brokenhearted. He is forgiving, and he wants you to feel loved and cherished and whole in him. Your sin doesn't have to define your life.

You are loved by a God who sent his Son to be nailed to a cross in your place. He watched his Son be beaten, spat upon, mocked, hung on that tree, and pierced with a sword to give you eternal life. He raised Jesus from the dead to defeat the death that you deserve. You need only believe to receive this precious gift!