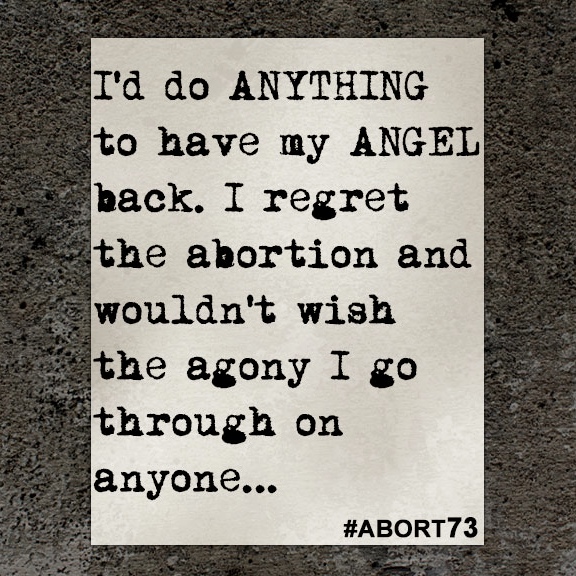 I'd do ANYTHING to have my ANGEL back. I regret the abortion and wouldn't wish the agony I go through to anyone...

Today marks two years after my abortion, and it still hurts having to talk about it—especially because my family doesn't know about it. And my friends? Well, they don't understand what I feel.

I was 19 and at law school when I got pregnant. My parents are strict, and I was afraid of what my parents would say or do to me for being such a disgrace. I remember feeling I was pregnant. I told my then boyfriend about it. He insisted I got a test and I did. It came out positive. I had mixed emotions and I cried like I never had that day. I hated myself and was disappointed with myself. I knew I didn't want to be a mom so soon, and I was afraid of what people at church would think, so I told my boyfriend about my decision and he supported it. He had a son already.

I remember well that it was a Tuesday when we went to the abortion clinic but there wasn't power that day, and I was told to come back the next. I remember feeling as though it was a sign that I should keep my angel, but I didn't. I went the next day to get the procedure done. I had never felt so cold yet relieved, but boy did I get sick after that. I got so sick I was admitted to a hospital—which is a story for another day. I healed and went on with my life. I broke up with my boyfriend because I felt it was his fault I got pregnant, I would cry myself to bed sometimes.

I miss my angel. It’s what I call my son. I would sometimes feel him move inside me even afterwards. Seeing babies sometimes gets to me. I bought a ring I wear with an infinity symbol. It’s a symbol of the love I'll always have for my angel, love that won't end or die—a symbol that will remind me of how much I would've loved. When I touch this ring it somehow brings me close to my baby.

I'd do ANYTHING to have my ANGEL back. I regret the abortion and wouldn't wish the agony I go through on anyone.