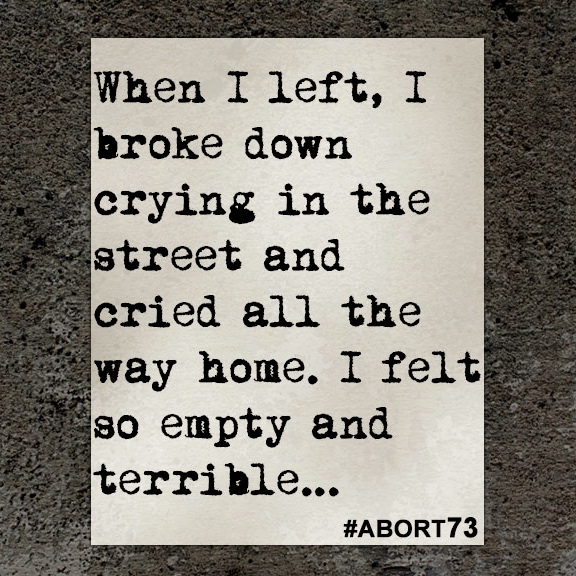 When I left, I broke down crying in the street and cried all the way home. I felt so empty and terrible...

I found out I was pregnant this past November. At first I cried my eyes out. I didn't want to believe the doctor. I immediately called my boyfriend and told him; he was speechless. That night we were contemplating what to do. I was so torn. We had decided on an abortion, but it took us some time to gather the money. I was constantly sick with morning sickness and had so many cravings. While all of this was happening, I was going to college and trying to work. It wasn't easy at all. Being sick all the time made it hard for me to work. I was having second thoughts throughout my whole pregnancy. I was getting attached to my little baby. My boyfriend was supportive of whatever decision I decided to make. I knew I couldn't give my baby the life he/she deserved. There were too many issues with my family, and it just wouldn't have been healthy. My parents would have been mortified and I couldn't even fathom the thought of telling them. So I decided to stay with my decision. It was the hardest choice I have ever made. I don't think anyone can understand what you're feeling inside, unless you've been through the same situation. My boyfriend tried to understand, but he couldn't. He didn't understand that bond that I felt already. I was always with my baby, he/she was a part of me and was there with me no matter what. I never felt alone. I had something so beautiful, and I gave it up. The day of the procedure, I had a dream that I decided not to get an abortion and kept my baby. I should have taken that as a sign that I knew, deep down, it wasn't what I wanted to do. However, I went through with it anyway. When I woke up from the anesthesia, I broke down crying, saying "what have I done?” When I left, I broke down crying in the street and cried all the way home. I felt so empty and terrible. It’s now May and I think about my baby every day. I hope he/she forgives me for what I've done. I wish I could change my decision. I hope whoever is reading this decides to really think long and hard about their decision. No matter what, you aren't alone in this. They are women all around the world who are feeling the same thing you're feeling. Stay Strong.