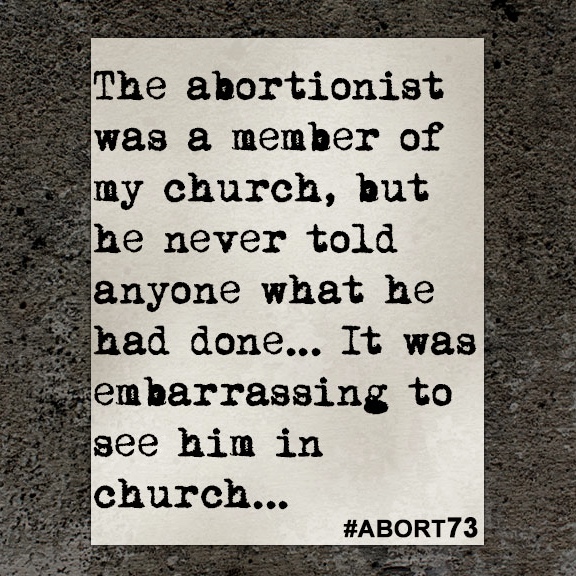 The abortionist was a member of my church, but he never told anyone what he had done... It was embarrassing to see him in church...

I was going through a nasty divorce and had been told that I was unable to have any more children at age 45. I had high blood pressure as well as a 7-year-old daughter. I had a boyfriend who had four boys who were grown. He did not want to have another child and told me that if I had this child my morals would be "bad.” He shamed me for my pregnancy. I wanted to be with him but was very hurt that he didn't want this child. My divorce attorney told me that if I had this child I might not be able to have custody of my daughter—and might not be able to get the financial settlement that she thought I should have been awarded. So I went ahead and had the abortion at seven weeks. I regretted it afterward. The father stopped seeing me and went with another woman whom he got pregnant. Later I met this woman who told me that she, too, had aborted his child—and gotten a tubal ligation so that she would not be pregnant again. I made the mistake of going back with him. All he did was go between the two of us. It was too much to take. My divorce became final shortly afterward. I think about my baby and hope to see my angel in heaven. The abortionist was a member of my church, but he never told anyone what he had done—since I had my procedure in a private doctor's office. It was embarrassing to see him in church. Lately I have gone to other churches to avoid seeing him. Oddly enough, I thought that my boyfriend would have stayed with me, but he chose the other woman. I would see him from time to time. He had been very ill for the past several years. This May he passed. I hope that he is with our angel as well as the other woman's angel. I hope that he finds forgiveness. I have worked with a pro-life group and have helped several single mothers—giving emotional support as well as financial support. I am close to my living daughter and her little girl, who she chose to have alone. She and her child lived with me. The father passed away from a drug overdose when my granddaughter was a toddler. My daughter was not with him. Their relationship lasted for a week during which time my granddaughter was conceived. I reported him to the state. They made him take a paternity test. He finally went to court to arrange for child support payments. But then he died. My granddaughter gets his social security, which helps a lot. I thank God for all our gifts and his holy grace.