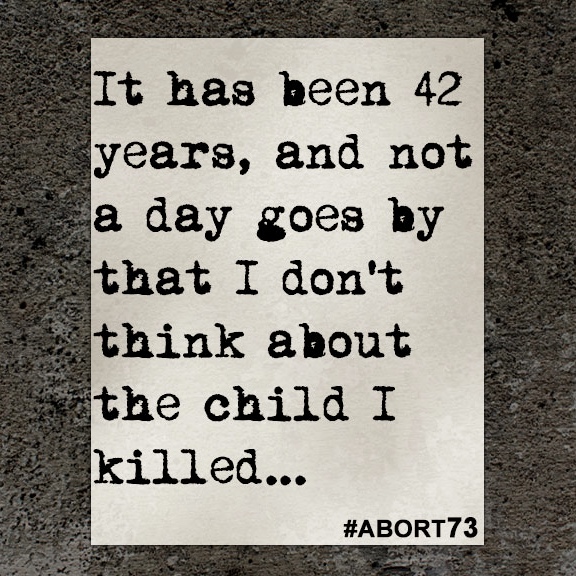 It has been 42 years, and not a day goes by that I don't think about the child I killed...

I had an abortion three months after Roe vs Wade in 1973. I was delayed having the abortion for several weeks and had to go through the saline process—killing the baby and actually giving birth a day later. I spent three days in a Wichita hospital for the procedure. About six other girls were going through the same procedure at that time. I was 17-years-old. It has been 42 years, and not a day goes by that I don't think about the child I killed. I had many children afterwards, trying to fill the void, but it never happened. My murdered child would be 42-years-old. It was NOT a clump of cells; it was a baby, and I willingly went along with my parents to have an abortion. My advice to anyone wanting to listen: Don't! You will never forget; the pain is just as great today as it was a lifetime ago. I have begged God to forgive me, and I know He has, but it is impossible to forgive myself! I wish I had given life to this baby, because it would be out there somewhere, and I could have hope for a reunion. Now I have only emptiness, where a child was denied the right to a life of his or her own!