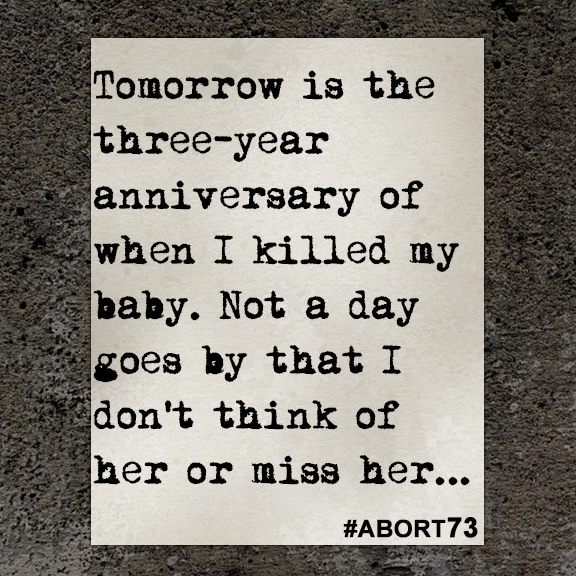 Tomorrow is the three-year anniversary of when I killed my baby. Not a day goes by that I don't think of her or miss her...

My boyfriend and I were in a serious relationship. We decided to have sex one night-it was both of our first times. I got pregnant. I told him, and he was instantly mad. He said I should have an abortion because he was still in high school and couldn't take care of a kid. I did not want to have an abortion. In fact, I did speeches in school about how abortion was bad and volunteered at pro-life clinics. I was very against abortion. Then we told his parents, and they both said we should have an abortion. I was still against it. Eventually, the talk died down. But one day I realized I was about to raise a baby with a dad that didn't want her, so I decided to have an abortion. I told everyone I had a miscarriage. Tomorrow is the three-year anniversary of when I killed my baby. Not a day goes by that I don't think of her or miss her. I hate myself for what I've done. I hate myself for not sticking up for what I believed in. If I had one wish, it would be to bring her back. But I can't. So I'm just stuck here in regret, and sorrow, and misery—all of which I feel I can't show. So I hide it and let it eat me alive. RIP HHS 8/12/12