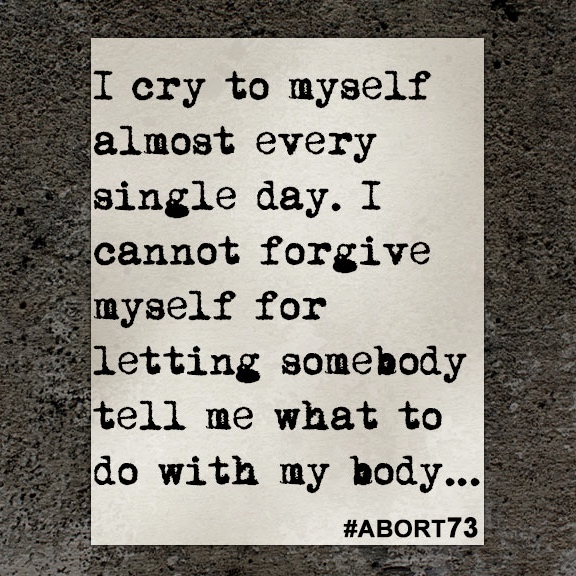 I cry to myself almost every single day. I cannot forgive myself for letting somebody tell me what to do with my body...

On March 29, 2015, I found out I was pregnant. I remember taking four or five pregnancy tests with my boyfriend and both of us just being thrilled about it—but the reality had not hit me yet. I come from a strict family. I knew this would not be acceptable. I still hoped though that just maybe my mother would understand. I told her about a week later, while we were in the car—so she couldn't hit me. Her only words were, "you're killing it." I'll never forget that moment of feeling so helpless. I had no other option at the time. I relied on my parents to get to my job. How would I support a child with no job? I let my mom convince me that abortion was the right thing to do, given my current financial situation. On April 10, we went to the clinic. I was seven and a half weeks pregnant. I was so numb I blocked out all emotions that day. I acted like I didn't care, and everything would be okay. I left that day and tried not to think about it. Not even a week later, my emotions came and smacked me right in the face. It is now August. I cry to myself almost every single day. I cannot forgive myself for letting somebody tell me what to do with my body. Nobody ever even knew of my sweet angel except my mom and boyfriend. All I want is to feel like my baby mattered too. I wonder all the time if I will ever get through this traumatizing situation. I don't feel the same anymore. I've never been so depressed. I wanted to keep my baby. I live with the ultimate guilt and agony of letting my baby go. My boyfriend has a daughter with an ex-girlfriend, and every time I see a picture or hear a story about her I lose it. I get so jealous and angry that OUR child will never get to have such love. I never thought this would be so hard to deal with. I wish I would have thought about my own feelings before I let my mom make my decision.