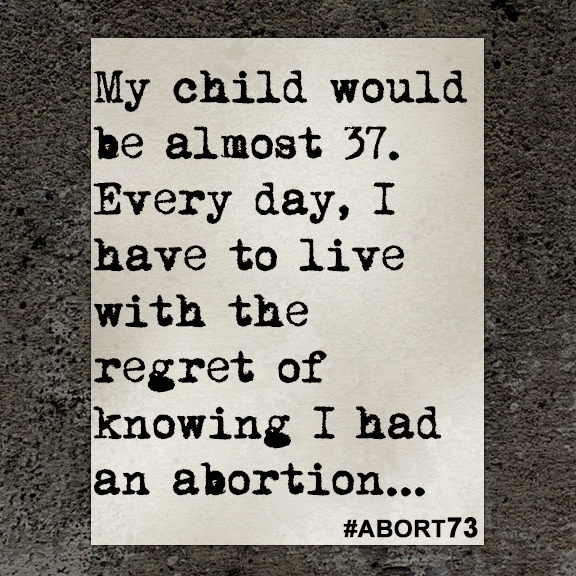 My child would be almost 37. Every day, I have to live with the regret of knowing I had an abortion...

My child would be almost 37. Every day, I have to live with the regret of knowing I had an abortion. I was 17 when I discovered I might be pregnant. I was scared to tell my parents, but I knew I had to. Abortion had never entered my mind. Once I told my parents and it was confirmed I was pregnant, I was made to have an abortion. I know my parents probably felt they were doing the right thing, and there certainly was more of a stigma in being pregnant and unmarried back then. It would also bring embarrassment to them—having a pregnant, unmarried daughter. Abortion was the wrong decision. It nearly ruined me. I wish I has the loving support I craved back then. I wish I had the voice to speak up for myself and my baby, but I was too frightened to go against what my parents wanted. After my abortion, no one spoke of that day again—and I was left to face the repercussions of that decision alone. Instead of feeling relief, my sense of hopelessness increased. Depression and a greater sense of worthlessness also increased in me. I wanted to die but was too much of a coward to do it. I did drugs to cover my pain. I regret that this baby never had the chance to live life this side of heaven. I wondered if God could ever forgive me for this horrendous sin. Since then I have become a Christian. I know I am forgiven by God for this sin, but I still struggle forgiving myself. God's grace covers my sin. He paid the price for me when He died on the cross for my sins—yes, even abortion. If I could talk to any woman considering abortion, I would say PLEASE DON'T do it. I have never heard any mother regret having had her baby, but as you have read here and in other stories, countless women do regret abortion. Yes, there is healing and forgiveness in Jesus Christ, but if I can save someone so much heartache by my story to not choose abortion, God gets the glory. I was a scared 17-year-old back then, young and stupid, but now I will be a voice for my child—who had no voice, who I can't wait to hold and love on in heaven. God in his abundant goodness still chose to bless me with two more children who I adore, and now I am blessed with precious grandchildren. God has been extremely merciful to me.