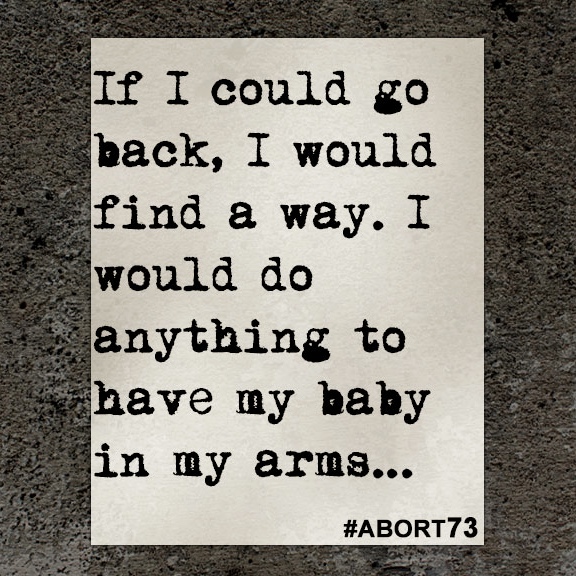 If I could go back, I would find a way. I would do anything to have my baby in my arms...

Nobody said it would be easy, and honestly I'm not even sure why I thought it would be. I decided in high school that if I were to ever get pregnant, I would have an abortion. The solution seemed logical. Growing up with a single mother was hard on me emotionally, and I knew that I never wanted to put a kid through that. I was going to wait until I was married to have kids. Unfortunately, unexpected things happen. Late December of last year, I missed my period. Normally, my cycle is all screwed up and has never been regular, so I didn't think much of it. Concerned, a friend convinced me to take a pregnancy test. It came up negative. I was so relieved. Beginning of January I still had not started my period, and I was starting to cramp and my breasts were extremely tender. My friend kept insisting I take another test because those were all symptoms of pregnancy. Reluctantly, one morning I decided to take it. Just for my peace of mind, thinking there was no way it could have changed in a matter of two weeks—not having had sex in that time. After a few seconds, I started to see two lines appear and my stomach started to knot. I waited for one of them to disappear, but after a few minutes, the two pink lines couldn't have been any clearer. I guess the first test was just too early to tell. I called my boyfriend in tears. We had talked about what would happen before I even took the first test, and we both decided that terminating the pregnancy would be best for both of us. We had only been dating for about seven months, and neither of us were in any financial position to support ourselves let alone a baby. The very day I found out I was pregnant, I called the clinic. I was so scared, and wasn't even sure how I was going to scrounge up almost $600 just for the procedure. They got me in a few days later. Over the next few nights, all I could think about was how amazed I was that I had this amazing little human growing inside me. A perfect little being that was both part of me and the father. It was so hard not to get attached, but I knew that it was for the best. I went to Planned Parenthood, with only two other people knowing where I was at. They asked me multiple times if I was sure, and I wasn't, but I lied. At the time, it seemed like I was doing the right thing, but it was after that it really hit me. I think that I did it out of fear, fear of what people would say, or even what I would tell my parents. I was so overwhelmed with fear and my own selfish thoughts that I forgot I was dealing with a baby. Not just any baby, but MY baby. The abortion itself was physically traumatizing, but nothing is quite as hurtful as the guilt I carry every day. In a way, I'm glad I didn't go through it totally alone, having my boyfriend by my side. I know that he is just as hurt as I am, and it breaks my heart even more to see him cry over the loss of our child. I often wonder how long I will remain this heartbroken, and I wonder if I will ever be able to have another kid and look at them and not think about how terrible of a mother I am. They will never get to meet their older sibling. I thought that making the decision on my own and knowing what I was doing would make it easier, but If I could go back, I would find a way. I would do anything to have my baby in my arms.