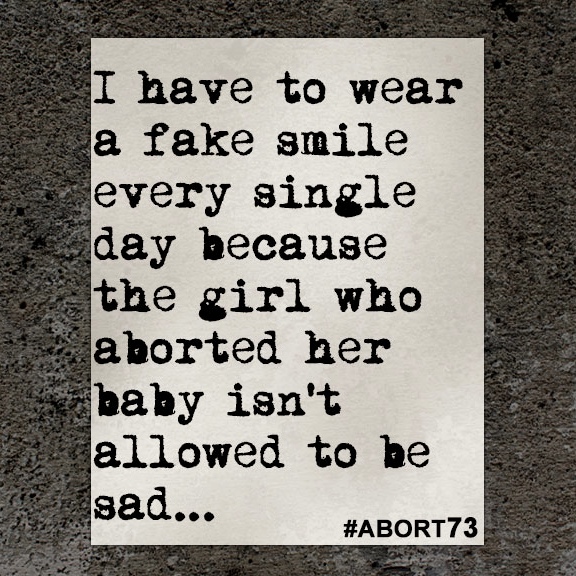 I have to wear a fake smile every single day because the girl who aborted her baby isn't allowed to be sad...

I never wanted to say goodbye to her or the thought of her. I'd wanted her in my life. I see Norah in every child I've seen since she left me—since I left her at that clinic in Champaign. She's stuck in my head like a song on repeat. Repeating every day since the day I found out she existed. Repeating every word my mother said, "You're not keeping that f***ing thing!" I didn't mean to act out of fear, and I'm afraid I'll never get to tell her how much I love her. I never wanted to let her go.

I was silent the entire ride to the clinic. To say I was scared is a disgusting understatement. I remember everything from that day like it was yesterday. Nothing went right. I was supposed to be put under, but there was a "scheduling error" and the anesthesiologist wasn't in the office. They wouldn't accept the form from the state saying it would be a free procedure since I was raped. I sat in the waiting room while my mom called her boyfriend begging him to transfer $400 to her bank account. I didn't receive the "counseling session" that I was promised, and they never brought my mother back there to talk to her about my aftercare like they said they would. I was taken into my room and asked to undress. I obliged nervously. I told my nurse I didn't want to do it. I cried to her and told her that I didn't want to go through with it. She told me it was normal to be nervous and that I needed to hurry so we could get started on time. The doctor entered the room already wearing a surgical mask, probably to protect her identity. I can still hear her voice explaining every single step of the procedure as it was happening. I was sobbing uncontrollably. The same nurse who I begged to help me was now holding my shoulders to keep me on the table. I begged for them to “Stop!” I begged for it to end! I wanted to save her! I wanted to save me. The doctor yelled, "Someone shut her up!" And I screamed, for her to stop telling me every detail of what she was doing. I started going in and out of consciousness. When the procedure was finished, everyone left the room. Supplies were scattered all over the place. It was dark. I was told to take my time getting dressed and to come out when I was ready. I walked into the lobby, and my mom thought it was time for the counseling. I quickly told her it was done and I wanted to leave. The abortion was already something I didn't want, and everything went even more wrong than I could have imagined. My mother's first words when we got in the car were, "I'm hungry. Do you want Chinese?" It was like it never happened. That's the way it's been for everyone but me. Nothing to see here. Nothing happened. No discussion. Carry on.

I need her here, but she isn't. My baby girl isn't here, and I have to face this world knowing that I am partially to blame for that. Some may say I never had her. They may say I'm not a mother because she was never born. They are wrong. I heard her heart beat inside of me. I saw my little girl even when she couldn't see me. I will see her again one day and when that day comes, I swear I'll never let her go. Until then I will fight for her. I think of my daughter every single day and my entire body aches for her. I'll be back for her but not until it's my time. I tried to end it all last March. I overdosed and tried to join my girl wherever she is. I don't know if there is a God out there or if it was her who made me call for help that night, but whoever it was, wherever you may be, thank you. I thank you because it wasn't my time to go yet.

My daughter would be four years old this December. I wish I could see her face as we light the Christmas tree. Decorating was always my favorite part of the holidays. Now the season just makes me miss her even more. I have to wear a fake smile every single day because the girl who aborted her baby isn't allowed to be sad. The girl who aborted her baby isn't allowed to mourn or grieve even though she was forced against her will. No matter how hard I try, I can't shake the guilt. I can't stop wondering if that was my only chance to be a mother.