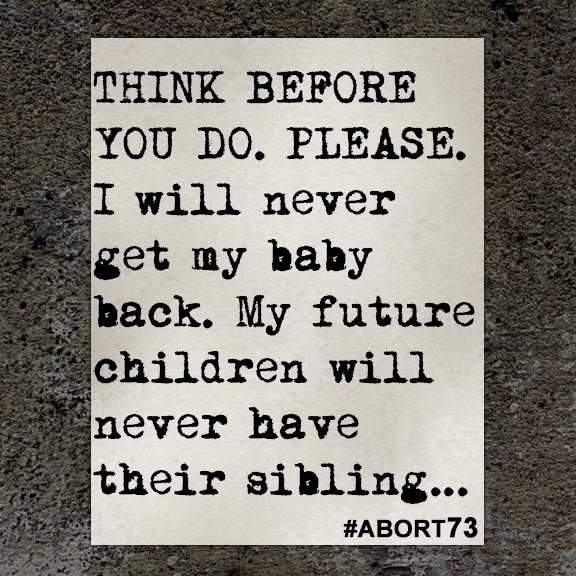 THINK BEFORE YOU DO. PLEASE. I will never get my baby back. My future children will never have their sibling...

My boyfriend and I had been together for six months. We live together in a one bedroom apartment. I had no job. We only had one car. At this point, my life seemed horrible until I found out i was pregnant. I’ve spent my whole life wanting to be a mother, and now was my chance. Although I have almost nothing, my parent were VERY supportive. They would give me everything I needed and help me plan out a budget. The only thing that was wrong here was my boyfriend wasn’t ready. He had accepted the offer of help but only pushed them away in fear of being in debt to all those who would help us. His family didn’t know, so it was just us and my parents. One of my friends has two children and neither father is very much help. She recommended abortion so I wouldn’t be in the same position as her. My boyfriend was very supportive and only wanted what I thought was best. At the same time, he was very depressed, scared, unsure, and angry. He had always wanted a child but not now. No matter how hard I tried to express all options, it wasn’t enough. Adoption was out of the question because I am adopted. All of the emotions that come with it is still too much to bear. My boyfriend and I had been fighting for weeks prior. Now that I was pregnant, we continued to fight even more. He became scared and repulsed by my belly, and I felt so alone. At last, I decided on an abortion. The clinic I went to was VERY HELPFUL AND SUPPORTIVE. I had never felt more safe at that place. I received counseling, but I felt if I had truly shared how heartbroken I was, they would have told me to come back, and I probably would have kept my child. Every day I regret not turning to someone for help. Every day, all I can see is the small picture of my baby on the sonogram. Every day I think about how maybe it was the right time, despite everything that had seemed to be going so wrong. I let my boyfriend convince me, and he doesn’t even know how I feel. He thinks I’m okay when I’m hurt. I had done something horrible to someone—a baby—that I was supposed to love and protect. The medication procedure was a two-day set of pills. On the 2nd day, an hour after insertion, my life changed forever. I regret that day every day. THINK BEFORE YOU DO. PLEASE. I will never get my baby back. My future children will never have their sibling. If you have enough for a baby and are under safe circumstances, just have the baby! If I had been in bad circumstances, I would still feel regret… But since I had it all and still gave up my child, I will never feel the same about myself again. I regret my decision every day.