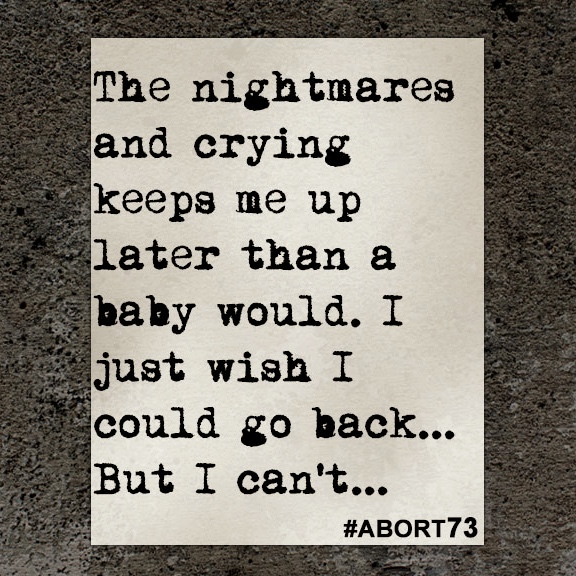 The nightmares and crying keeps me up later than a baby would. I just wish I could go back... But I can't...

I was not forced into an abortion. My boyfriend did not threaten to leave me. Actually, he made me promise against it. My parents did not want me to have a baby at 14. My father bombarded me with facts about teen pregnancy. Never once did they tell me the bad things about abortion, and people never do when they want you to get one. I tried to get pregnant—which seems crazy at 14, but I have been struggling with depression for what seems like forever, and I wanted to feel needed. I was for two months. Never in my life was I as happy as I was when I took the pregnancy test. I cried tears of joy and jumped around, and it was magical. But having a baby at 14, I could not financially support myself, so my parents would be helping a lot. What I was forced into was going to the clinic the first time—to learn about abortion and talk to the doctor. I cried the entire way there. I knew this wasn't what I wanted, but it was all happening so fast. My mother had already made the decision for me. I cried for the days in between visits, and I cried when I got there. It was truly traumatizing. It has been two years, and I cannot go into a doctors office without thinking about it. You rarely hear mothers say that they regret having their little bundle of joy, but you hear all of the time that people regret their abortions. I am not 100% against abortion, which will probably get this post taken down, but I have never made a bigger mistake in my entire life and probably never will. This will stay with me when I grow up and have another child. The nightmares and crying keeps me up later than a baby would. I just wish I could go back and tell myself to quit being selfish. But I can't. I've already made my mistake.