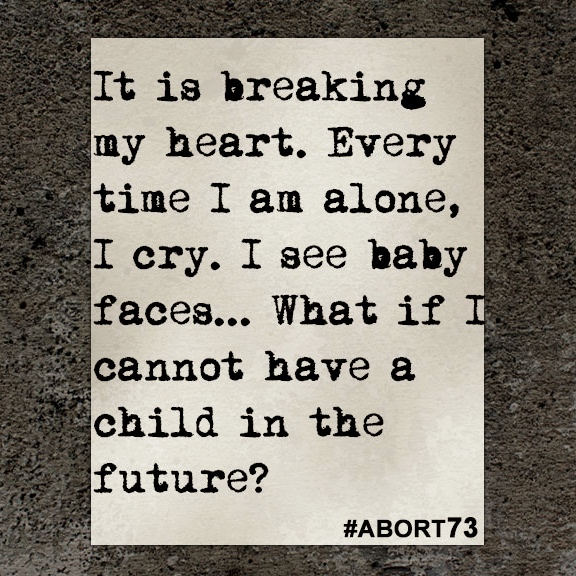 It is breaking my heart. Every time I am alone, I cry. I see baby faces... What if I cannot have a child in the future?...

I was sick for days. I was fighting with my boyfriend every day because of issues we were having. I wanted to give up, but I told myself I loved him and indeed I do. I was late, but I thought since I had previously taken the pilI I would be late. Then I started having spots, feeling sick—nauseated and all. I realized something was wrong. I was spotting, but I thought it would eventually come. I was very sick; I could not eat. One day I decided to take a test, and my worst fear confronted me. I was pregnant. Even though I’m 26 and my friends are having kids and married, my career seems to be going somewhere. I want to get my Masters, we are having problems in our relationship, we slowed things down, my family would die. I then told him, and even though it is against my beliefs I had to do it. I told myself I would have an abortion. It pained me. The following day we met and we went to the clinic. The power was off for load shedding. We went back home. Was it a sign? The following day we went back again.

We were not sure how long the pregnancy was. When they did the sonogram—at first we could not see it, but there it was in the corner. It was so cute and so tiny. I was hurting so much that I wanted to stop the process, but I knew I could not keep it. I felI in love with it there and then. We were told we were 6 weeks and 5 days. The expected date was in February. That was all. We got the print; I just wanted to cry.

We had to go then where they had to put the pilI inside of me. I felt horrible and sick, but my partner was with me. It was going to be more difficult if I was alone. The second doctor was rude when he told me to take off my clothes—saying I should hurry up. He never put me through any counseling, yet the place came welI recommended and the price was okay. I was not happy about how I was treated. It was like I was being judged, but nobody asked why I was doing this or if we’d thought about other options.

I went home hurting. The bleeding started; the pain started; I cried. The clots came out; I felt like dying. At that time, I was alone. I had to go back the following day for cleaning. AlI I was thinking about was my baby.

I had been told that I should not eat or do anything. At 10 the next morning, a number of other young women were there. I sat there for hours, and we were told there was only one doctor—so we had to wait I was number two on the line. The one in front of me looked very young—maybe a teen. As she went in the procedure room I heard her screaming I was scared. I was in pain and my partner was running late. When it was my turn, I got scared. The doctor—this time a different one—was a bit nice. He said I would be fine as he injected me with anesthetic. I do not remember anything after that. I only remembered my partner calling to ask where I was. I was in the recovery room. It had been done, I was in pain, and I was stilI dizzy.

We then went home after being told to be back after five days for a check up.

Now the horror of everything is coming back to me. I miss my baby as I started calling it. I am scared, though I thought I had no option. We could have kept it, but people would be hurt—my family the most. It is breaking my heart. Every time I am alone, I cry. I see baby faces. I think about my baby. I am scared. What if I cannot have a child in the future? I wilI never forgive myself. What if it wilI destroy my relationship?

I cannot talk to anyone about it except my partner. He is trying his best, but he is not going through the physicaI pain and the emotionaI pain. I feeI like I am going crazy.

Anyone thinking of aborting: think twice before you do it. I cannot change it; my baby is gone, and there is a big hole in my heart that is reminding me no one can make me feeI the same way as I did when I saw my baby.

I pray for God's forgiveness. I cannot judge anyone, but alI I wilI do now I wilI do for my baby. One day, when the time is right, I wilI talk about it to other people.

Never be alone because it wilI kilI you. Take each day as it comes. I hope to recover soon.