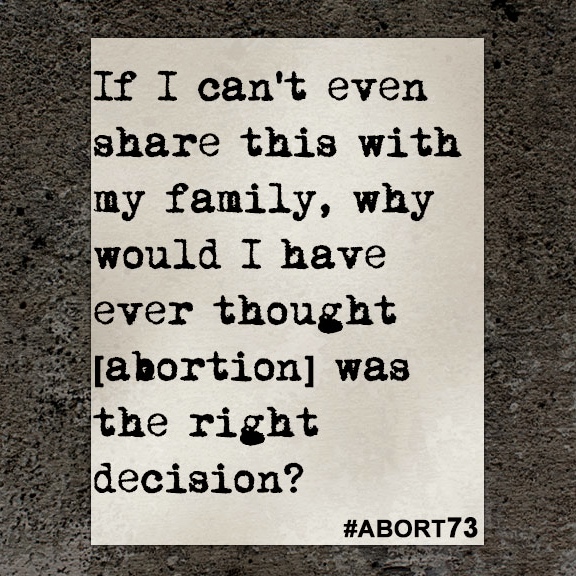 If I can't even share this with my family, why would I have ever thought [abortion] was the right decision?...

I was 26 when I made the worst decision of my life. It's been a year since I chose to have an abortion, and there's not a day that goes by that the memory of it doesn't exist. I had just spent thousands of dollars to move across the country. I had just started a new job and had just moved in with the guy I was dating. A month after moving, I started waking up dizzy every day and blacking out in the middle of work—along with severe morning sickness. Pregnancy never even crossed my mind until the guy I was dating brought home a test for me to take. With my symptoms, he knew, though I was clearly in denial. I couldn't even bring myself to read the test; he had to do it. Instantly tears started falling because I knew it couldn't have happened at a more terrible time and didn't know what I was going to do. He was dead set on abortion, without a second thought. But I never thought that'd be something I would ever even consider. As the weeks went on, the pressure to have an abortion built—along with the pressure of bills, as I was missing so much work due to severe symptoms. I thought if I can't even handle this now, how will I ever handle a child? I felt emotionless the entire time I was in the clinic. I went back for my sonogram to confirm and the dreaded question "would you like to see" came from the nurse in front of me. Of course I had to, and my heart instantly broke. I remained emotionless the entire time as they asked question after question about wanting to continue the pregnancy or continue with an abortion. I sat in a room watching a movie, waiting to see the doctor for over an hour. To this day, I couldn't tell you what movie I watched. I was frozen in time. I don't think I was comprehending at the time what I was even doing because I was so frantic and worried. I chose to continue with the abortion. To this day, I have no idea why—other than the fear of knowing I was going to be in this alone as the guy I was seeing made it very clear an abortion was necessary, or he was not going to be in the picture. I want to blame him; I want to resent him, but I cant because in the end I realize it was my decision. I could have said, “No, I don't want to do this,” but I didn't! To this day, we are trying to pull through what we went through a year ago, and to this day I still have doubts and resentments towards him—even though I know he didn't do it for me. To this day, I find myself crying from the thought of it or at the sight of a pregnant woman, a mother and her child, or children in general (although that brings me joy too because I love kids). It also happens at work (a hospital) when I see a sonogram being done and remember seeing my baby—my baby that I'll never know the sex of or what he/she would look like and sound like and love like. I will never see my baby grow up because of a decision I made. The pain is an intense yet dull pain inside me that will be inside me for the rest of my life, and I am only 27. I find myself writing letters to my baby—asking for forgiveness or explaining what my thoughts were then and are now. It’s a hole in my heart that can never be filled by anything—not another pregnancy, not an adoption, not donating my eggs, and certainly not surrogacy which are all things that have crossed my mind since last year. My advice to anyone in this situation would be not to do it if you don't need to. If you do, think long and hard about what you’re doing. Don't make a hasty decision or a decision based on someone else because I bet if you don’t, you will choose your child every time. This is my first step to sharing my story. I have yet to even share this with my family. I have a friend who went through a similar situation, and we find support in one another—as well as a friend that I trust like family. If I can't even share this with my family, why would I have ever thought it was the right decision?