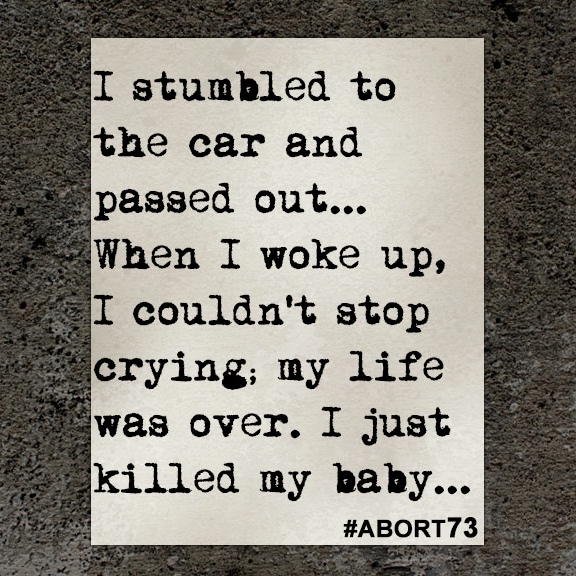 I stumbled to the car and passed out... When I woke up, I couldn't stop crying; my life was over. I just killed my baby...

In January of 2014 I found out I was pregnant. I had been with my boyfriend at the time for almost a year, and I thought that we were in love. We had talked about having a future together—getting married and having kids. But when things did not go the way he wanted them to, he changed his mind.

I took the test in a Walmart bathroom and cried to myself for several minutes before praying and telling myself everything would be okay. I decided that there was no reason to be sad. This was a miracle, and I was scared but excited! When I told my boyfriend, the first thing out of his mouth was, “We have to have an abortion.” That word has never even crossed my mind, and here the man I thought I loved was telling me we had to do it. He told me that we weren't ready, that I couldn't do it, and that nobody would love it. I knew I could do it, and I knew my family would love it as much as I already did. But there was no changing his mind, and I was too weak and scared to do anything.

I was alone for most of the time, and I fell deeper in love with my baby each moment. Despite the negative and awful things my boyfriend said, I just knew that I would find a way out of it. I almost told my family so many times because I knew they would not let it happen. I almost ran away so that I could have a chance on my own. I didn't have anywhere to go, but I told myself anywhere would be better with my baby. There were times that I almost killed myself because I knew I would not want to live without her.

I went to an appointment at a Pregnancy Care Center with amazing workers—there to help with anything. I talked to a counselor, and she prayed with me then held my hand for the ultrasound. I got to hear her heartbeat. I cried; it was the most amazing thing I have ever witnessed. I called my boyfriend after the appointment to tell him how amazing it was and that we had to keep her, but he didn't answer the phone. When I showed him the ultrasound picture, he laughed and said it didn’t even look like anything. It was the most amazing moment in my life and the best picture I had ever seen, and he saw nothing. My world was shattered.

He made me make an appointment with the Hope Center. It was four hours away, and I just knew there was no way we could pull it off. I knew this was the way out! We would get caught, my family would hate him, and I would get my baby. But we made it.

The building was terrifying, and the outside was filled with protestors. I wanted to scream for their help, but I kept quiet. We waited for so long and I had to get up many times to go to different spots to answer questions and get blood drawn. It was so scary; I wished I would die. They gave me an ultrasound again, and I was 13 weeks. I turned my head because I could not bear to see her, but out of the corner of my eye I saw it. What had been a tiny speck before was a tiny person. I saw her arm waving. I cried my eyes out before it was time for me to go back. I almost ran away so many times. I wish I had!

The room was tiny, the women crying were many, and I was more scared than I ever thought I would be in my life. Lying on the table, the nurse told me I might feel a little pinch. It was the worst pain I ever felt. I wished they would just kill me! Afterwards, they gave me a pill to take and sent me on my way. I stumbled to the car and passed out from the medication. When I woke up, I couldn't stop crying; my life was over. I just killed my baby. My boyfriend didn't understand. He told me we had our lives back and everything would be back to normal. But I knew it never would, and I knew I hated him.

I couldn't eat, sleep, or even think for several months. I felt dead inside. I continued dating him only because he was the only person I could talk to. Despite how much I hated him, he still let me scream and cry. I eventually started to look up other stories about women who had abortions and ways to help. I started getting close to God and that alone helped a great deal!

"I can do all things through Christ who gives me strength." Philippians 4:13

I broke up with my boyfriend and haven't had anything to do with him since.

I learned that it helps for me to think about the time spent with her. It wasn't a long time and I never felt her move, but my body knew she was there. I was sick for all three months—not just morning sickness but all day! It was terrible and wonderful. I had to hide it from everyone which was hard, but I loved it because it was her. I craved chicken legs every night for the second month at midnight. I would wake up and want them so bad and giggle that that was what she wanted. I also craved orange juice and grape Kool-Aid for all three months. I could not stand to eat chocolate or onions; the smell made me throw up. I was hardly showing at three months—but I could tell a difference, and I loved my belly. I would wake up every morning holding my stomach and smiling. I would give anything to feel it all again.

I still struggle every day, just less than I used to. I still cry sometimes and I will always hurt for what I did. It is mourning the loss of a loved one. I would give anything to hold her in my arms and kiss her sweet face. I know I will get to see her again someday, and that it what keeps me going. I have to remind myself that God forgives my sins; it is forgiving myself that it the hard part.