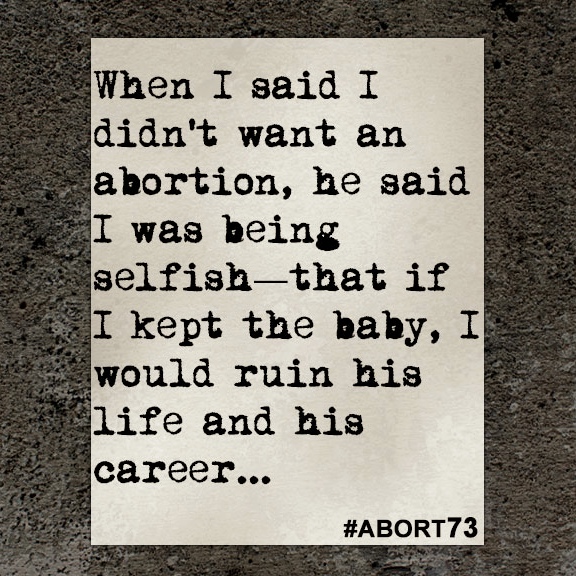 When I said I didn't want an abortion, he said I was being selfish—that if I kept the baby, I would ruin his life and his career...

It happened last summer (2014). Sometime around the second week of June, I found out I was a month pregnant by my boyfriend. I was 22, and he was 23. He had just graduated from college, and I was still in school. I was in such shock; he wanted to make a decision right away, but I was confused and l had a hard time believing it was actually real. About an hour after telling him via phone, we met up and talked about all the possibilities. What would happen if we kept it, if we gave it up for adoption, or if I had an abortion? He was a chatterbox, but I was speechless. After he discussed our options, he said he wasn't sure if he wanted the baby. Then he said, “You have a life inside of you that has our blood.” He reached out and put his hand on my stomach. For just a moment, it actually felt beautiful. Then when we went home and had the day to think, he was frantically calling me—telling me I had no choice but to have an abortion. I told him I didn't want to, but he wouldn't listen. When I said I didn't want an abortion, he said I was being selfish—that if I kept the baby, I would ruin his life and his career. I was crying to him over the phone, and he was yelling at me to have an abortion. The next day he kept calling and texting that I had to call the clinic to set up an appointment for the abortion. I didn't want to, but he literally wouldn't stop pressuring me—so I called. Since I was only four weeks, they told me I had to wait another two-and-a-half weeks until I could have the surgery. So, I scheduled the appointment two-and-a-half weeks from that day. I didn't want to, but I thought I would just take the two weeks to really think about it. My boyfriend told his family and friends. They all agreed with him about having an abortion. His dad was convinced I got pregnant on purpose to get money out of them—which is not true at all. As time went by, my pregnancy symptoms became more intense. I got horrible cramps, my breasts hurt terribly, I gained some weight. It was crazy that there was a person growing inside of me that was completely dependent on me; the baby's life was in my hands. I kept telling my boyfriend I didn't want an abortion and that I would rather give it up for adoption. He still continued saying that the only option I had was abortion—whether I liked it or not—and that adoption would be a waste of time. Even my friends told me that I shouldn't do adoption. I kept on trying to convince my boyfriend otherwise, but he wouldn't. When the day came (June 28, 2014), it was traumatic. My boyfriend came and so did his father’s girlfriend—to make sure I went through with it. A couple hours went by for them to take my blood and do the ultrasound. While all this was happening, I could feel the baby stretching inside me—which explains the bad cramps. The nurse told me I was exactly 6 weeks and 4 days pregnant—and the baby had a heartbeat. She asked if anyone was forcing me to abort. I lied & said “no.” My boyfriend and his dad's girlfriend were in the waiting room making sure I went through with the whole surgery. I wanted to run out, but I knew it would result in a massive argument. So I went through with it even though I didn't want to. Before entering the room where I would have the surgery, I held onto my stomach and whispered “goodbye” to my child. The doctors put me to sleep and carried through with the abortion. When I walked out of the office, my boyfriend was very relieved and kept thanking me for doing it.  I regret it; I do. If there was any way in this world I could go back and do things differently, I would pay any price. I really wish I chose an open adoption so that my baby would have lived and been raised by good people—while I could still move on and excel in my life. I think about it every day, and sometimes my baby visits me in my dreams.