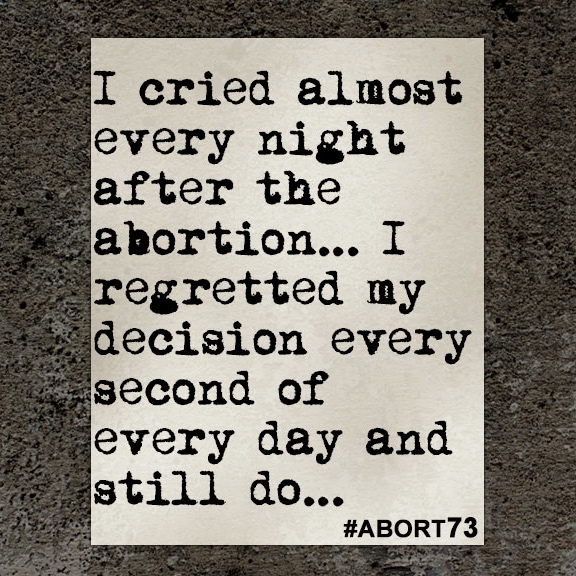 I cried almost every night after the abortion... I regretted my decision every second of every day and still do...

I will never forget September 7, 2013—the day I was forced to have an abortion. I found out a month prior that I was pregnant by my (now ex) boyfriend. It was not planned, and the baby was expected to be born on April 27, 2014. We had been dating for three years at the time and were pretty much living together. I was 30 and he was 48. We worked together as well. When I told him, he basically told me I had no choice but to have an abortion. If I decided to go through with having the baby, he said he would not support me in any way. I was scared and didn't know what to do. I regret only telling him and not opening up to anyone else about this. I felt hopeless and felt like I had no other choice but to go through with it. So on that dreaded day when I went to Planned Parenthood in Chicago, I did it. I was awake while the process happened, and it was the worst and most painful ten minutes of my life. They should require you to be put to sleep while undergoing this. After this, I became severely depressed, but there is so much more to this story.

Prior to finding this out, I had two back surgeries in June 2013. Due to all this, I had a lot of pain medication and muscle relaxers. You name it, I had it. About a month after I had the abortion, I was still in a very dark, depressed state and still hadn’t told anybody—beside my boyfriend who I was still dating at this time. I cried almost every night after the abortion and was lucky if I got three hours of sleep. I had horrible nightmares from then on about the whole process and felt so shameful about everything I did. I regretted my decision every second of every day and still do. One Sunday night, I could not handle it anymore. I was still staying at my boyfriend’s, and I just wanted to sleep. Since I had all this pain medication, I figured maybe that would help. Two days later I woke up in the ICU at Advocate Illinois Masonic Hospital, unaware of anything. Apparently I had taken two bottles of my pain medicine. When I woke up, my whole immediate family was there, but my boyfriend was not—so I was very confused about what happened. As the days went on, I got better and was transferred to my hospital, Northwestern Memorial Hospital. Also, as the days went on and I got better, I learned more of what had happened. Apparently my boyfriend found me on the floor with empty bottles of medication. Rather than calling 911, he carried me to my car—not his, which I thought was odd—dropped me off at the hospital and called my family to tell them. Once one of my sisters and brother in law got there, he left in a cab and gave my sister my keys. He did not tell the doctors or my sister the full story when they questioned him about what happened with me. I learned that had I been found and brought to the ER five minutes later, I would not have made it. While I was still in the ICU, they were worried that I would have to have a liver transplant. By some miracle, I recovered more fully than the doctors ever expected. Part of me feels like the baby I aborted was an angel in heaven helping to save me and give me another chance at life—forgiving me for what I did. At this time, I did share the full story with my immediate family.

After being at Northwestern for about a week, I was then transferred to the Northwester Psychiatric Ward. Due to taking all the medication, I had no choice. I was scared out of my mind, but it was an eye opening and enlightening experience. It was there where I finally opened up even more about my experience and learned a lot about myself. After four days of being there, I was released back into the real world. It was a bit scary. I took some time off work and went to a lot of therapy sessions which also helped me cope with the situation. Going back to work was very hard. As I said before, my ex-boyfriend and I were still working for the same company. After some time, I finally got a new job—which helped a lot. I am just learning to live with my decision, and I am in a much happier place now. However, not one day goes by where I do not think about my abortion and regret it. To memorialize the baby I wish I had never aborted, I got a tattoo of angel wings and a quote: “your joy is your sorrow unmasked.” I learned that quote in therapy, and it just really stuck with me about this whole situation.

I really think places like Planned Parenthood need to provide patients with more information—specifically about the aftermath of what may happen to one’s emotional state. All they inform you of is what happens during the procedure and that is it. I do not think places like this should exist at all. I am now anti-abortion and support anything to help this cause. I want to do what I can to help others in this situation in any way I can. I want my voice to be heard. I am no longer ashamed of what I did, but will always regret what I did. Regret dies hard.