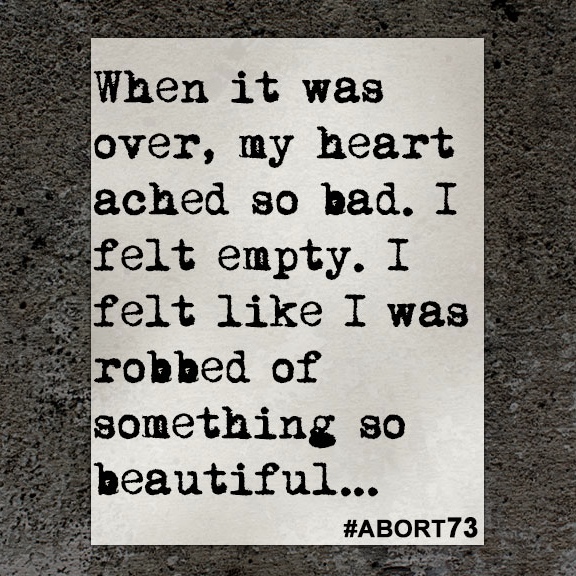 When it was over, my heart ached so bad. I felt empty. I felt like I was robbed of something so beautiful...

When I found out I was pregnant, on March 16, 2015, I was shocked. I had tried for six years and nothing happened, so I figured I was infertile. Days before I tested positive, I just knew I was pregnant. I was happy and shocked but I never had any support. The man who for six years said he wanted to get me pregnant had a change of heart. He was scared and made sure I went through with an abortion. He messaged me every day until the day that I aborted. I cried every single day—all day—and said “I’m sorry” so many times to God and my baby. Two days before my abortion, I told myself that I would stop crying because I had to do it. The day of my abortion I tried so hard not to cry. My nerves were crazy. Even my blood pressure was high that day, and it didn’t hit me until I was laying on that bed looking at the ceiling. When it was over, my heart ached so bad. I felt empty. I felt like I was robbed of something so beautiful. Ever since my abortion, the father has never messaged me to say he misses me or loves me. Ever since then, I hate him and everyone who didn’t support me—everyone who decided for me and pressured me into having an abortion. Some days I’m good, and some days I’m bad. I feel empty and angry. Sometimes when I see women with babies, I feel envy and wonder why they can have a baby when I had to get rid of mine. It took me a while to be able to see babies. Now I don’t know if I ever want any in the future. I don't think anyone understands this pain. People think that if you get an abortion, you feel nothing because you chose to end it, but there were financial reasons why I couldn’t keep it. I don’t mind being a single mother, but I’m not financially stable. I thought I was infertile. I hope God forgives me.