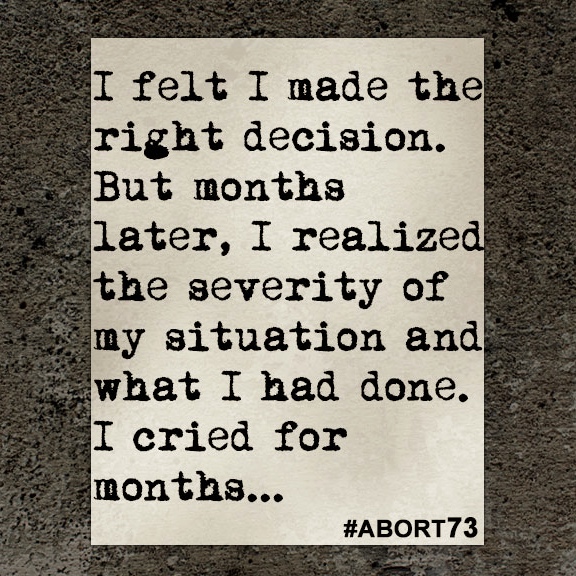 I felt I made the right decision. But months later, I realized the severity of my situation... I cried for months...

I was 16 years old when I found out I was pregnant. My boyfriend at the time supported me, and he told me that whatever decision I made, he'd support me in it. I was crying the entire time, and the only words I could utter were, "I want an abortion.” Being so young, that was the only solution I could think of. I saw a picture of my sonogram the day I did it, and it was just a tiny dot in my womb. Sometimes I think if I saw an actual figure, I might have changed my mind. Today, I think that maybe I should have thought it through—given it more careful consideration, but I was young and scared. My parents would have killed me. But most of all, I thought of my brothers and how they would feel with their sister who was still in high school walking around with a belly, or my boyfriend who would probably have had to be working all day and going to night school. No breaks, no fun, no games. It would be all responsibility. My parents would have had to help out too, and we had just gotten a house in another borough at the time. We were going to move, and on top of many new bills to pay, they had to help me pay mine. I know people say you should be responsible while having sex, but things just happened. I walked out of the abortion clinic happy as hell. And I felt I made the right decision. But months later, I realized the severity of my situation and what I had done. I cried for months. It took me a while to get over it. I couldn't talk to anyone about it because I never told anyone. And when I spoke to my boyfriend about it, he put it all behind him. We grieved at different times. He grieved at first, and I grieved long after. Every time I see a baby, I wonder how my son would have looked. I'm convinced he was a boy for some reason. I love that child. And I know he's up in heaven. If someone is reading this who's the age I was then, I won't say I regret it, but either way it's going to take a toll on you and your life. Nothing after this point will ever be the same. In life, you have to make choices, and you have to live with those choices every day.