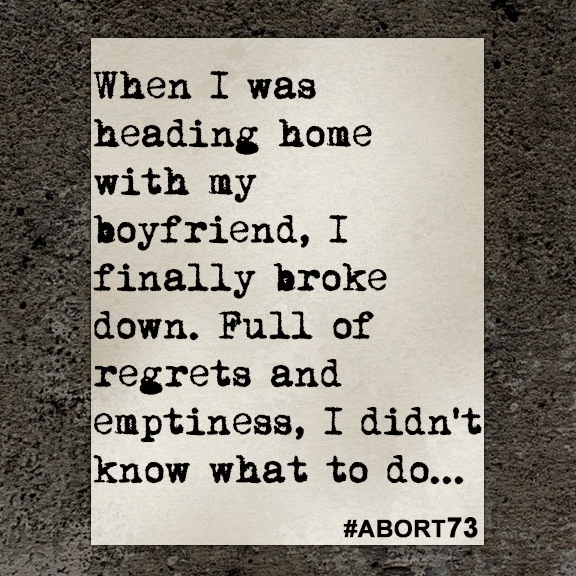 When I was heading home with my boyfriend, I finally broke down. Full of regrets and emptiness, I didn't know what to do...

It's been a month since my abortion. When I found out I was pregnant, it was already four weeks in. It devastated me as I'm only 20 and in college. My boyfriend was really supportive and said he would support the baby if I decided to keep it. I didn't know what to do. I can't even support myself, and I couldn't tell my parents. So when I went to see the doctor, the first sentence that came out was, "I want an abortion.” The doctor seemed extremely cold while talking to me and gave me a piece of paper with all the clinics for abortion. As days went by, I felt sick and sicker. I started eating more and stopped smoking for the baby, even though I knew that I was going to abort it. But feelings grew, and I started asking myself whether abortion was the right way out for me. I always doubted myself when carrying the baby, and the more I think about it the more it hurts.

The day of the abortion was not easy. Heading to the clinic and talking to the counselor was easy; the procedure was fast and painless as I was given IV. But when I was heading home with my boyfriend, I finally broke down. Full of regrets and emptiness, I didn't know what to do. I hope the baby goes to heaven, but it has scared me ever since. Whenever I see a baby, I imagine what my baby would be like if I didn't abort it.