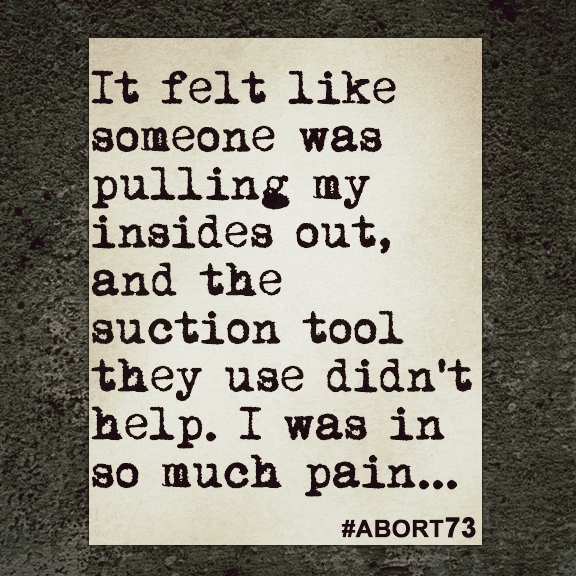 It felt like someone was pulling my insides out, and the suction tool they use didn’t help. I was in so much pain...

I am 24 years old, and I already have two children—ages 1 year and 4 months. I decided abortion would be right for me not only financially but also physically. I had my first child at 25 weeks, 6 days due to a bulging water bag. After my son was born, I was ruled high risk. Before my son came home, after spending 98 days in the NICU, I was already pregnant again. My children’s father and my fiance panicked and thought abortion was an option for baby #2. I couldn’t bring myself to do it, and with my mother's support and family, I knew I would go further in this pregnancy. It was a long and hard process to keep baby #2 full term. I was limited in a lot of things and took Makena (progesterone) shots my entire pregnancy. The pain and the soreness from those shots were worth it. I finally delivered at 38 weeks, 6 days by C-section. My doctors warned me I would be at risk if I had another child anytime in the next five years, because I would have to get another C-section. That was is November, and by February I discovered I was pregnant with #3. I was so in a shock. My fiance was about to start his career truck driving and I was about to start school and work—plus caring for my children. In my mind, I couldn’t go through it again; the load was too heavy for me. I decided it would be best to get an abortion, and he supported me. I went to Planned Parenthood, and the first visit was to see how far I was—6 weeks, 3 days. I scheduled my second visit for the next day, but due to how long the process took and trying to do it without family knowing, I had to reschedule. Finally, on April 8, at 10 weeks, I finally did it. I decided to do it without IV sedation because I didn’t have a driver and drove myself. That morning, I looked up people stories who had it done. Believe me, you can’t listen to everything, because we all take pain differently. I was only given 800mg of Ibuprofen, which I usually take for a head ache, and an antibiotic pill. Shortly after, I was called into the room. That’s when the tears began to fall uncontrollably. They start it off like a normal pap smear which isn’t bad, but the three shots you get in your cervix, and the rest of the procedure, are torture. It felt like someone was pulling my insides out, and the suction tool they use didn’t help. I was in so much pain I was just trying to breath and tuning the pain out was a struggle. The nurse tried to calm me down and told me I was doing good, but the doctor couldn’t tell I was breathing and yelled at me to breathe. I was already upset at the decision I made, but he just made matters worse. After it was finally done, he examined the tissue and put my IUD birth control in. He apologized for yelling. I was so disappointed in myself and cried in recovery for what I did. I am very religious. I was raised in church, and I question if my god would ever forgive me. Who am I to say who can live and who can’t? I questioned if I was selfish for the decision I made. I feel as if I could’ve [kept the baby], and at the end of the day thats what happens when you are not responsible. I promised myself I would NEVER do that again. My fiance cried, and we promised each other we will never do that again. I came home to my children, and I can’t imagine my life without them, and I will never forget what I did. I hope one day I can forgive myself, because I will have to live with my decision forever. Here is my advice for someone who is thinking about abortion. You should never be forced to do it. Forget that person who says he will leave. Forget what friends have to say… At the end of the day, it’s you who has to face it alone, and live with that choice.