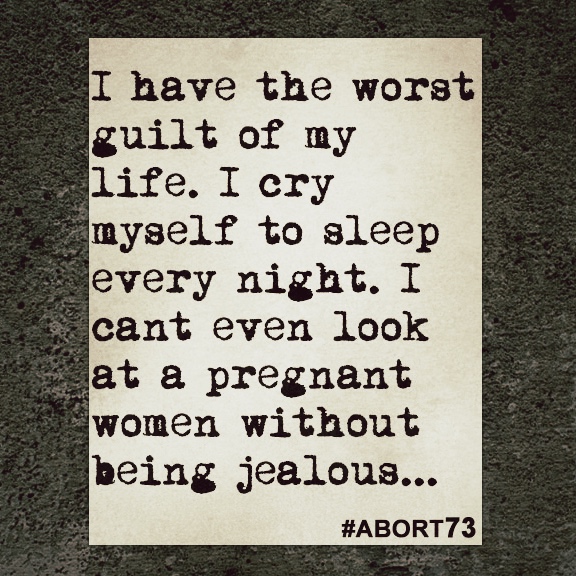 I have the worst guilt of my life. I cry myself to sleep every night. I cant even look at a pregnant women without being jealous...

I found out I was pregnant on December 6, 2014. At first, I was extremely excited after trying with my boyfriend for two months to get pregnant. However, once I told him I was pregnant, the situation changed. He was less excited than I was and only worried about finances. He said to me within an hour of finding out I was pregnant that we should abort it—but that he’d support me whatever I chose.

I told my mum who had no emotion at all really. Just like my boyfriend, she was more worried about my finances and if I could provide for it than anything else. After four days of having both of them prodding me towards an abortion, I finally called my doctor and booked an appointment for an abortion—which was the worst decision of my life. I ended up going with my cousin who fell pregnant at the same age I did but kept her baby. She couldn't understand why I was getting rid of something I clearly wanted. My boyfriend never came. He couldn't get the day off, which broke my heart. I wanted him there for support.

Laying on the table getting my scan done, the abortion nurse had the screen turned slightly towards me, and I saw everything from the sac to this squiggly shape. The nurse asked me if I was sure I wanted to do this. Like a coward, I didn't even bother to say “no” or say how I truly felt. I was scared of how my boyfriend would react to me not having an abortion when I said I would.

Now three months later, I have the worst guilt of my life. I cry myself to sleep every night. I cant even look at a pregnant woman without being jealous, and I certainly can’t look at babies without the feeling of being a baby murderer.

My relationship with my partner has fallen to pieces and is only just holding on by a thread due to resentment and not taking the time to really think of all my options. I don't speak to my partner about my feelings as I know he would dismiss them—which really hurts me. I cant understand why he's not upset or grieving over our aborted baby.

I would advise anyone who thinks about having an abortion to wait and think of your options. Don't do something based on others’ opinions, wants, and needs.

If I had waited another two weeks I would most likely be pregnant now, but that stage has passed. Now I have to grieve and pray for forgiveness from God and my baby.