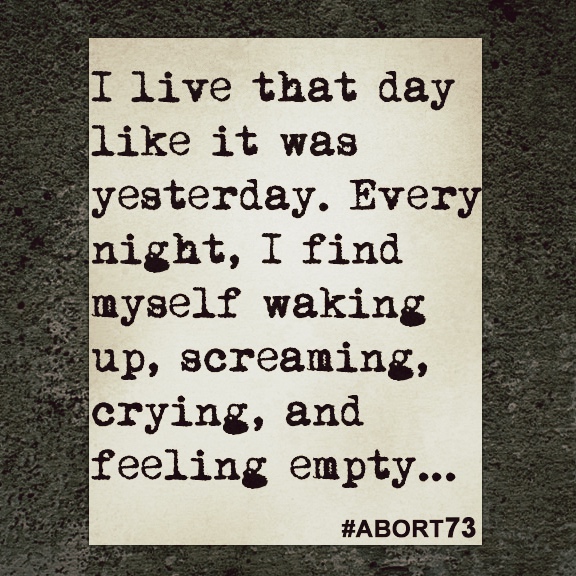 I live that day like it was yesterday. Every night, I find myself waking up, screaming, crying, and feeling empty...

I found out I was pregnant at seven weeks. I was so scared but felt a little warmth in my heart. When I told the father, he ignored me and said I was lying. I could not bear telling my mom, but I knew I had to. Before I told her, I called my doctor to schedule an appointment. I found out I was having twins. One twin measured a little under, and the other twin measured at a rate that worried the doctors. I asked for my mom to come back into the doctor’s room so I could tell her; all she did was cry. Three days went by. Between the father of my children and my mother, I was drug through the dirt, called names, and constantly pressured into a decision I would ultimately regret. One year and one month later, all I want to do is turn back the clocks, push everyone out that hurt me and pressured me. and take back something I wish I never went through with. I live that day like it was yesterday. Every night, I find myself waking up, screaming, crying, and feeling empty. I suffer from PTSD and depression now. I cannot handle the sight of twins, pregnant women, or even the children I used to watch every day. I fear the baby section in all stores—as well as my doctor’s office and even the hospital. I regret the choices I made, and now I feel as if I am left alone to deal with a situation I just want to take back.