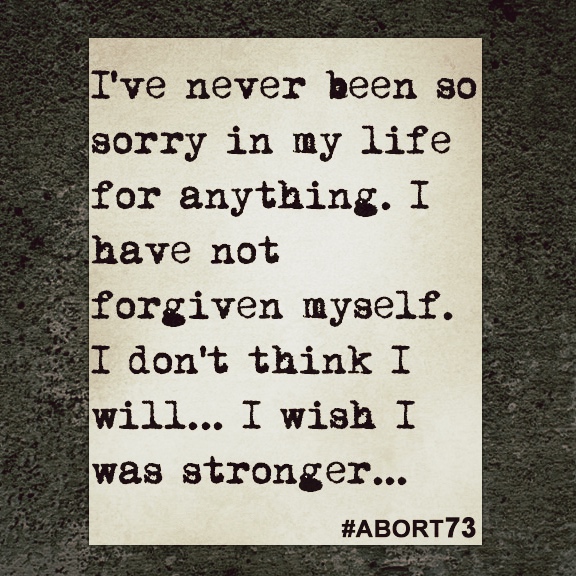 I've never been so sorry in my life for anything. I have not forgiven myself. I don't think I will... I wish I was stronger...

I had an abortion about a month ago. I wanted to be pregnant. I was happy, but the guy I was seeing was in another relationship and already had three children by three different women. He was with the last child's mother. He didn't even believe in abortion, but I guess for our child, he changed his mind. He wanted me to get an abortion. He was my best friend as well as lover, so losing him by keeping the child did not seem like the best choice. I decided to get an abortion for him. I made an appointment, but it was three weeks away. Every day got harder to keep sticking with that choice; therefore, I made an appointment at a clinic four hours away the next day—after about a week of knowing I was pregnant. The father couldn't go with me on such short notice, but I wasn't even sure I wanted him to. I was so torn between my love for him and resentment. Why were his other children worth loving? Why did they get to live, but not my child? I drove the four hours and met with the counselors and lied and lied—saying this was my own, personal choice, that this was what I wanted to do. I had to wait to get the abortion until the next day. I woke up at 1 o’clock in the morning—crying. I hadn't talked to the father all day because I slept all day to avoid thinking. I ended up waking up in the middle of the night with nothing to do but think. And, oh, did I think. And cry. I ended up leaving and driving home at 4 o'clock in the morning—deciding to keep my child. It was like a weight was lifted. I told him, and he said I was ruining his life. This hurt, but not as much as when I decided on the abortion. After a couple of days, we talked. And because I hated the thought of not having him in my life, I decided to follow through with the appointment we had made at first. I acted fine up until we got to the clinic on the day of the abortion. I began to act resentful towards him. He got frustrated, but not as much as me. He didn't get to come to the back with me. He couldn't understand what I was feeling. I cried in the bathroom after the sonogram. I didn't let anyone see because then they might ask me if I was sure, and I'd probably break down. I had to do this to keep him. Everybody else there was ok, which he so kindly pointed out—as if everyone else being ok made me ok. God, I wish it did. I sent a picture of the 7-week-old child inside of me to him as he sat in the waiting room, hoping for some compassion, some kind of acknowledgement of the importance of the life of my child—OUR child. He didn't say anything about it. The procedure was worse than labor with my son—not that the pain of it really compares to the emotional trauma. I asked them how they can do this all the time. The doctor got an attitude because I was freaking out and about to pass out from weakness and pain. I cried all the way home, which was two hrs. The father of my child knows other people who have had an abortion and looks at them and thinks that is how it should affect me. He says they are fine, so he assumes I should be. But here I am, up late, crying, a month later. I knew I would regret it for the rest of my life before I did it, but God, it is really terrible. I know God has forgiven me because I've never been so sorry in my life for anything. I have not forgiven myself. I don't think I will. I got a tattoo for my child. I wish I was stronger. I wanna help change someone else's mind about having an abortion as if it will help me cope. I ended a heartbeat, and I think about it all the time. When someone is pregnant near me or even when I see his other children, I'm resentful. What makes them so much better than my child?