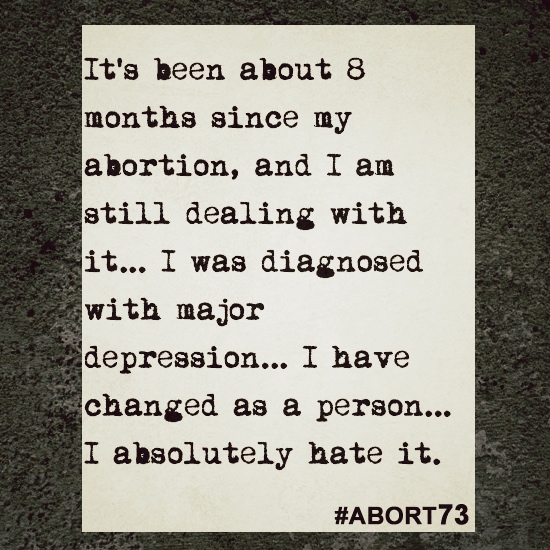 It’s been about 8 months since my abortion, and I am still dealing with it... I have changed as a person... I absolutely hate it...

This past summer, my life completely changed. In the beginning of June, I found out I was pregnant. My boyfriend and I were having problems and fighting all the time. The entire month of May he did not let me see him—not even for my birthday. So that entire month, each night I would sit upstairs alone in my bed and plead with him and cry to myself. He made me feel awful. I was so consumed with our relationship that I wasn't paying attention to what was happening to my body. Some nights the thought that I might be pregnant popped into my head, but I would quickly shove it aside because I could not even think of that possibility while my relationship was spiraling out of control. A few days after my birthday, I told myself I needed to figure out if I was pregnant or not because I had not had my period for some time. I told myself I needed to face my fear. I couldn’t avoid it any longer. So one weekend when my parents were away, I went to get a pregnancy test and told my friend what I was doing. I also told my boyfriend that I might be pregnant in a text because when I told him I needed to talk to him in person, he said “no.” I went home and took the test; it read positive. I sobbed on the floor of my bathroom for about half an hour. I told my friend, and she told me to come over to her house. She went to Walmart and got another test for me because the first one might have been wrong. So I went over, and I calmed down. When I returned home, I took the second test. Same result. Once again, I cried. Later that day, my parents came home, and they started talking about getting me braces just to straighten my teeth. They would be spending over $3,000 dollars on me. That was when I decided I had to tell them, I couldn't pretend everything was ok and let them spend so much money on me if I was going to have a baby on the way.

I called my mom up to my room and sat down with her. I told her and sobbed. She hugged me and said we needed to tell my dad. I was so nervous to tell him because I didn't want him to be disappointed in me. My mom went downstairs and brought my dad up. When he came into the room—before I said anything—he sat down and just hugged me. My mom sat on my other side and hugged me as well. I sobbed and told them the news.

After I told them, I called my boyfriend. He ended up going to the beach instead of seeing me later that day, so I told him I was pregnant and that I’d told my parents. He got mad at me because I didn't talk to him first, but I didn't care at that point. He was not there for me and my parents were.

Abortion wasn't an option for me at that point. I was pro-life. My family is Roman Catholic, so we believe every life is sacred. I told my parents that maybe I could give it up for adoption, because I had no job, my parents worked full time, and I was in the middle of my college career. They told me they would never let me give my baby away. They told me they would adopt it before they let some other family take away their grandchild.

My mom made an appointment with my doctor for the next day. The next morning, my mom said she had been reading up on medical abortions and how it just induces a miscarriage, so it is not invasive and kind of natural in a way. My doctor gave me some paper on nearby women's clinics that performed medical abortions. We estimated that I was about 6 weeks along, so the medical abortion was still an option. There is a time limit in the state of Massachusetts that says you have to be 9 weeks or less to take the pill. We called a local clinic and made an appointment for the next morning.

The next day, my mom drove me to the clinic and came into the waiting room with me. The first stop for me was to have an ultrasound to see exactly how far along I was. Not only was the ultrasound nerve-wracking and scary, but it was also uncomfortable. When the nurse told me I was 9 weeks and 5 days, I started sobbing. The pill was no longer an option for me.

I was faced with the decision of either keeping the baby or getting the surgical abortion. My mind had already accepted the fact that I wasn't going to keep the baby, but knowing now that my only option was the surgical procedure drastically changed things. My emotions were running wild. I was crying constantly. I felt nauseous, and I didn't know what to do.

After the ultrasound, they told me to go back into the waiting room until a counselor come out to see me. When they called me in, my mom came with me this time. They told me I could have the abortion that day but without anesthesia—or come back later that week when the anesthesiologist was there. Since I was there at the clinic now—and I wasn't sure if I would have the courage to come back later—I decided to do it that day. They explained everything to me in detail while I cried. They brought me back to the waiting room. I went in to have my procedure, and I cried the whole time.

Once I was in the recovery room, I ended up having a reaction to one of the numbing solutions, and they had to flip my chair back so feet were above my head. I felt nauseous, shaky, and I started sweating—all in the matter of 30 seconds. I was so scared, and I thought to myself, “this is punishment for destroying an innocent life.” After I settled down, the doctor came in to check on me. I told him I was still having major cramps, and he decided that I needed to go back into the exam room because he needed to take out more to decrease my cramping. I did not want to go back in there; I was so scared, and my mom was nowhere near me. She had to stay in the waiting room. Once I got back to the recovery room, the doctor came in once more. He asked me to walk to the bathroom. I couldn't even make it to the toilet without help. The nurse helped me out of my chair, and I got so dizzy that I could only get to the sink. I could not move any closer to the toilet. The doctor then decided I needed to be hooked up to an IV to get some electrolytes into my system, because I lost so much blood.

What usually is a 15-minute recovery period turned into more than an an hour. I came out and went home.

I was diagnosed with adjustment disorder after my abortion. Every night, I cried and regretted my decision. I regret how I handled it and how I made an impulsive decision.

It’s been about 8 months since my abortion, and I am still dealing with it on a day-to-day basis. I was diagnosed with major depression and am now on antidepressants and am going to counseling. I have changed as a person. I have anxiety. On some days, I don't recognize myself at all. I barely know who I am anymore, and I absolutely hate it. It scares me. I struggle with my decisions now and will probably struggle with them for the rest of my life. My views on life and what is important have changed drastically. I want to make something positive from my experience. I know I can, but I right now I can't. I have to fix myself first; I have to love myself again. I don't mean the narcissistic view of loving yourself but the humbled one. I feel zero self-worth for myself. I hate myself. I have gained weight and have gotten out of shape. I was a gymnast who worked out 20 hours a week, and now all I do is lay around the house and watch TV. I have no motivation to do anything else. I get anxiety if I try to go out. and do something. Only on good days do I go out and do something or if I am forced to go do something I will.

I am not sure why I am writing this story. I am not even sure if anyone will care to read it. But for some reason, I need to say it. Honestly, the only thing keeping me from hurting myself or killing myself is my family—and my fear that there is nothing after death: no heaven, no nothing. Also, the fact that I would not be allowed into heaven if I committed suicide. But if someone wanted to kill me, I would welcome it. I know it is not right to say these things. It scares me, but that is how I feel. Maybe I am writing this so if one day those things aren't enough, and I need a little extra push, I can look back to this and maybe see that someone cared to read my story. I’m fighting my hardest to overcome this, but it’s so hard!