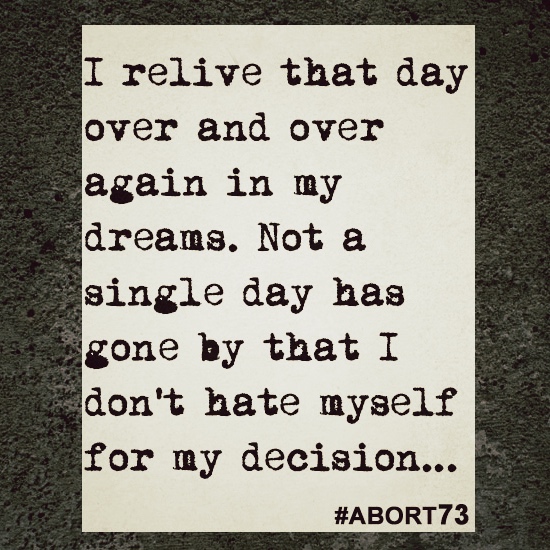 I relive that day over and over again in my dreams. Not a single day has gone by that I don't hate myself for my decision...

I had an abortion in August 2014. That day still feels surreal to me. I didn't want an abortion but ultimately saw it as the best option. I had made the mistake of getting involved with a married man. We had been seeing each other for quite a few months when I found out I was pregnant. He told me that it was my decision to keep the baby or have an abortion, but he made it clear that I'd be ruining the lives of many people if I kept the baby. He has a daughter with his wife. If she found out about the pregnancy, she would move away with his daughter—making it almost impossible to see her. Plus, his family would basically disown him. I convinced myself that it was better to go against every moral fiber I had to prevent ruining so many lives. Now I realize I deemed their lives more important then the life of my baby. Since the abortion, I live with the regret that came from the worst decision of my life. I relive that day over and over again in my dreams. Not a single day has gone by that I don't hate myself for my decision—or wish I could go back in time and change my decision. The abortion was done using medications, I took the first pill at the clinic and the following day took medication to induce labor of the fetus. At the time, I was 8-weeks pregnant. The night of the abortion, I remember crying myself to sleep—still being able to feel my baby. I woke up the following morning knowing that my baby was gone. It was the worst feeling in the world. Eight months later, I still struggle with regret and depression from my decision—especially as I get closer to the due date of the baby I decided not to keep.