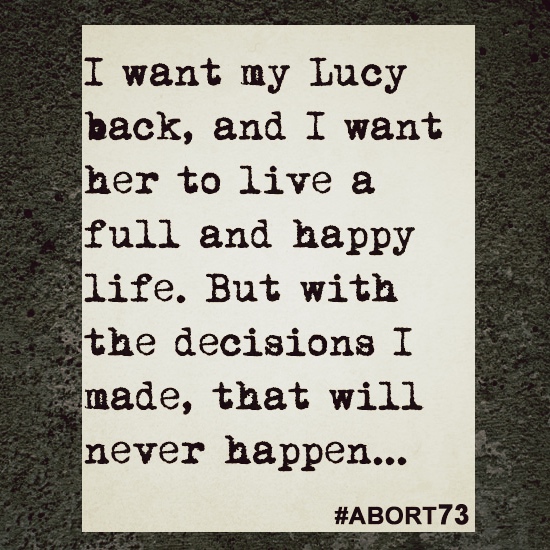 I want my Lucy back, and I want her to live a full and happy life. But with the decisions I made, that will never happen...

I was 15 and had been with my boyfriend for two months. I was 2-weeks late for my period; I tried telling him all day. When I did, we both cried for hours. He told me he would support whatever decision I made. He told me he wanted to abort it. I have always been against abortion. When I spoke to my mother about it, she immediately told me adoption would not be an option. But that is what I wanted to do. I was starting to feel so alone in this situation, "I'm 15, I can't take care of a child, I want to give it a happy life." That's what I thought. When we talked to his mom about it, she said, “I hope you make the smart decision and abort it.” Everyone that knew told me to abort it. It was literally me against the world. So I did what everyone told me to do. I did it through pills. This was never the way I wanted it to happen. And now I'm stuck every day with this image in my head of a little, beautiful girl being pushed on a swing. She's blonde—like I was—with pigtails on the top of her head. She has freckles all over her face, and this continuous loop of the name Lucy is running in the background of this reoccurring image. I feel like that's what she would look like, and her name would have been Lucy. I want my Lucy back, and I want her to live a full and happy life. But with the decisions I made, that will never happen.