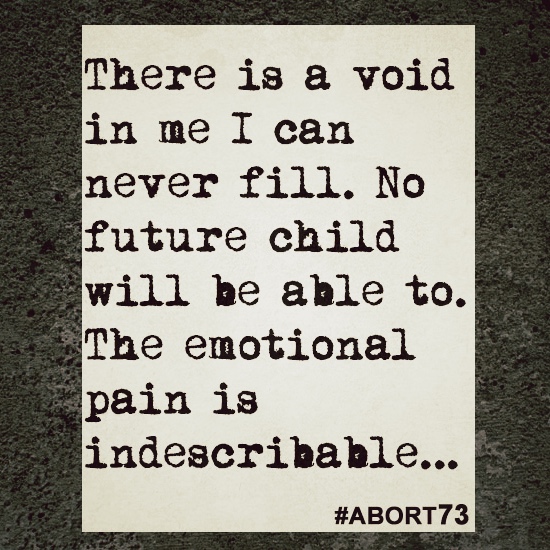 There is a void in me I can never fill. No future child will be able to. The emotional pain is indescribable...

In February of this year, I was very, very close to taking my own life. I attempted suicide for the third time on Super Bowl Sunday and woke up just before Valentine’s Day with tubes all over—a machine helping my lungs function and a flood of questions from nurses and doctors who were shocked I knew my own name. I have suffered from borderline personality-disorder, among other mental illnesses and drug addiction, for the last decade of my life. After surviving, I began to seek help and started attending AA meetings. It was there I met and fell in love with my best friend—my soul mate. We found out on Christmas that I was expecting. I was never happier in my entire life, although we are both still getting back on our feet. I'm back in school and pursuing my degree while working part time. He is living in a sober house—working and saving money. I knew I wouldn't be able to give the baby all of the material things in the world, but I knew the baby would be provided for, and I would give it the love and family I desperately wanted as a child—since I grew up in an abusive home. Soon thereafter, we decided it would be selfish to bring our first child together into chaos— having no support emotionally from our families. My boyfriend also already has a child whom he is trying to win joint custody of, so we decided to terminate the pregnancy. On the way, my boyfriend—like he’d been doing for several days—talked to my belly to tell our unborn child goodbye. It was the most painful and heart shattering feeling. It's New Year's Eve, and I am embarking on 2015 with a heavy heart, empty arms, and regret. After finding out I was pregnant, it was the first time in my life that I had meaning and felt whole. Now there is a void in me I can never fill. No future child will be able to. The emotional pain is indescribable. I won't ever be the same, but I know that I cannot let my baby down. I have to go ahead with life, be happy and find success and peace because otherwise I'm nothing but a selfish murderer—when really this decision was the most selfless act of love I could have possible done for my child.