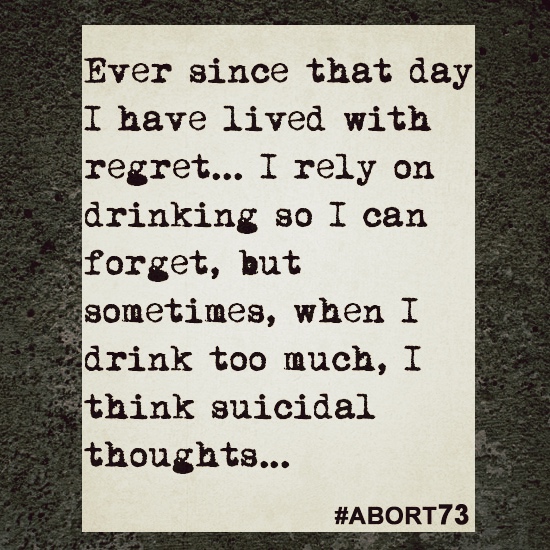 Ever since that day I have lived with regret... I rely on drinking so I can forget, but sometimes... I think suicidal thoughts...

I was 17 when I found out I was pregnant. I had been dating my ex-boyfriend for two months. I always dreamed of becoming a mother; I was shocked but happy when I found out. The doctor did an ultrasound, and it seemed surreal. My ex-boyfriend was there with me. As soon as we left the clinic, he immediately told me an abortion would be the best choice. I was devastated when I heard him say that. I always have been against abortions, and I told myself I would never do that. Since we were not on the same page, he said that we should talk with our parents before we made a choice. He only talked to his mom, and she said abortion would be the best choice because we're both young and we would ruin our futures. I was mad and couldn't believe she would tell me to do that, so I talked to my mom—hoping she would say to keep the baby. My mom broke my heart because she also said to have an abortion. I felt like I was alone, and nobody helped me to choose to keep the baby. I never told my dad because I was scared. I let people influence me into having an abortion. On the day I had the abortion, there was a man outside the abortion clinic. He tried stopping me. I called my mom crying and told her I couldn't go through with it, but she told me that I had to. So I did. I saw other women in there, and I couldn't believe we were all there for the same reason. When I woke up from the abortion, I immediately started crying because it hit me that I had lost my baby. Ever since that day I have lived with regret and wonder, “what if?” I rely on drinking so I can forget, but sometimes, when I drink too much, I think suicidal thoughts. Every day I'm working on moving on but it's a struggle.