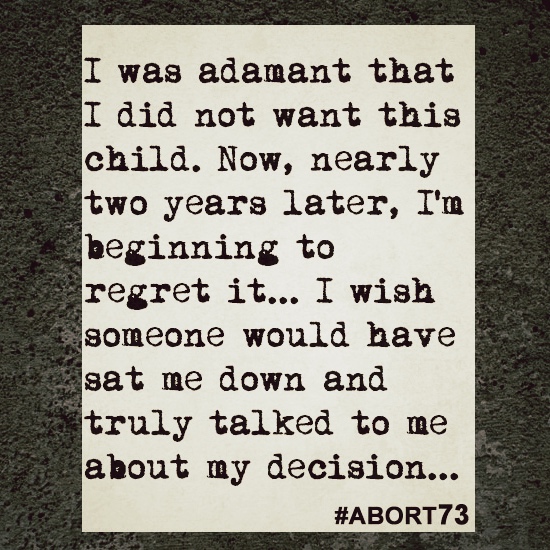 I was adamant that I did not want this child. Now, nearly two years later, I'm beginning to regret it...

I found out I was pregnant on December 17, 2012. I was 6 weeks and 6 days along. I had just recently broken up with my boyfriend and was talking to a new boy I was interested in. I knew from the moment that I found out that I did not want the baby. I was in Michigan visiting a friend for her wedding. We were at Walmart when I told her that I thought I was pregnant and that my period was a week late. My boobs were swollen and I was sick all the time too. So I took two tests; they were both positive. Of course I freaked out. I didn't tell the father until tow months after the abortion. I had my abortion on December 28, 2012. The guy I was talking too, who is currently my fiancé, didn't know about the abortion until a week later. I just didn't want to lose him. I needed a change. My ex-boyfriend had told everyone that he broke the condom on purpose—hoping I would get pregnant and stay with him. Little did he know what I did. My best friend drove me to the clinic. I was adamant that I did not want this child. Now, nearly two years later, I'm beginning to regret it. I would have a 1 1/2 year old running around. I secretly want to get pregnant again, because I miss my child—even though I never really knew him/her. I wish someone would have sat me down and truly talked to me about my decision. Although I still may not have kept him/her, I may have chosen adoption instead.