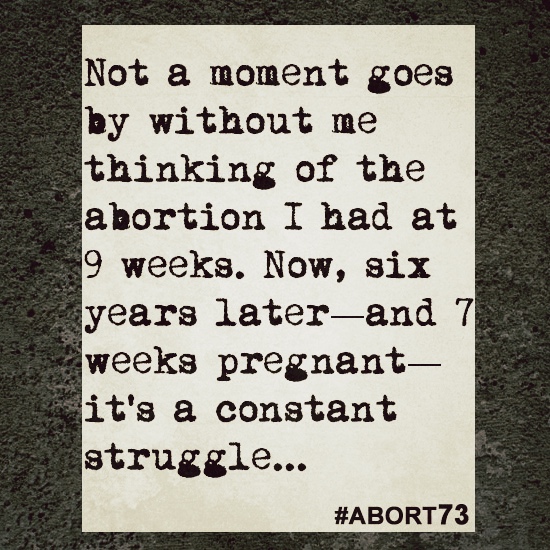 Not a moment goes by without me thinking of the abortion I had at 9 weeks. Now, six years later... it’s a constant struggle...

I was a sophomore in high school when I found out I was pregnant. I'll never forget the feeling in my chest. I felt like the wind had been knocked out of me. My best friend was with me. I remember telling her that I wanted an abortion, but when it came out of my mouth it scared me and killed me. I went home and told my boyfriend. At first he seemed happy, but things changed quickly. He accused me of cheating and said it wasn’t his baby. That killed me. I didn’t want to be a single mom—especially at 15. My mom eventually found out I was pregnant. Surprisingly, she wasn’t as upset as I thought she'd be.

We went to the doctor. They confirmed my pregnancy, and gave me my options. I went with abortion. I’ll never forget walking into the clinic. The man who was going to be performing the procedure told me how fast and simple it would be to remove the "tissue.” Thinking about that always makes me feel nauseous. What some people don’t know is that I was ready to back out of the abortion, but I was already dizzy from the meds they had given me. I’ll always remember him telling me

to look up at the photo on the ceiling—the photo of palm trees and the ocean. And I’ll always remember the noise—the humming of the vacuum scarred me.

I left there and have been regretting my abortion ever since. Not a moment goes by without me thinking of the abortion I had at 9 weeks. Now, six years later—and 7 weeks pregnant—it’s a constant struggle, but I know I’m forgiven by GOD. And thats been my biggest relief. I just want other women out there that have gone through this to know that there is hope.