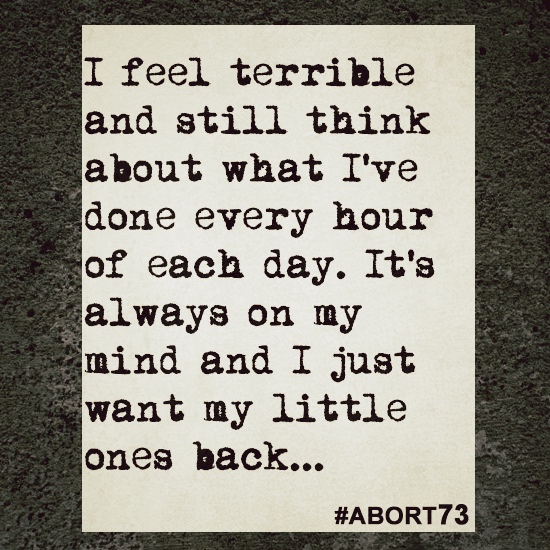 I feel terrible and still think about what I've done every hour of each day. It's always on my mind...

I found out I was pregnant in November 2013. My period was a week late, so before my 8am shift I decided to take a test. It came back positive. I was still living at home with a mom who would kill me if she knew I was pregnant. I went to work that day with butterflies in my stomach the whole time. How was I gonna tell my “friend with benefits” that I was carrying his child? I waited until around Thanksgiving to tell him, and we discussed what we should do for hours. Both of us came to the conclusion that we were going to get an abortion. Neither of us really wanted to. It was scheduled for a week before Christmas. I got the ultrasound pictures of the little peanut and walked out of the clinic with more emptiness and regret than I’d ever felt. The following April I found out I was pregnant again by the same father. Without really talking much about it, I made another appointment. He was going to be moving, and there wasn't a way I could raise a child myself. That baby's due date was New Year's Day. How could I make such a huge mistake two times? I feel terrible and still think about what I've done every hour of each day. It's always on my mind and I just want my little ones back. To hold them and kiss their noses. Hear their laugh and love them unconditionally. I just hope that one day I can meet them and that they will understand.